The Pew Group by Anthony Oliver 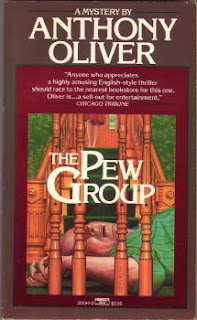 Murder Most Innocent
She didn't mean to do it, but somehow Doreen Corder's foot went out just as her detested husband reached the top of the stairs. He was in the antiques business and left her next to nothing in his will. Now all Doreen has is the Pew Group, a rather ugly but extremely valuable piece of pottery. It will bring her a pretty penny. Except that it has been stolen. So poor Doreen takes comfort in the arms of virile young Joseph O'Shea, leaving her irrepressible mother, Lizzie Thomas, with the help of former police inspector John Webber, to recover The Pew Group.


Although this mystery starts off with a very spontaneous murder the crux of the story is about the theft of a very valuable piece of pottery. It was a great romp, I loved it. Full of wonderful characters and an old village church crumbling around them. A 'witches coven' regularly cavorting naked in the full moon through the pastures, Miss Hislop the virginal old maid, crazy about the new young curate Michael Sabini and determined to experience sex just once in her lifetime! John Webber, the detective put out to pasture by his bosses, comes home to Flaxfield to get in shape again (or should he just retire?) and leads the hunt for the Pew Group. Mrs. Lizzie Thomas, Doreen's irrepressible mother, determined to set her daughter's life to right and maybe find love in the middle of it? The sexy Irishman, O'Shea with his butterflies on his bum. Not to mention the delightful vicar, William Coley, who's single-minded determination to get the restoration of his church funded might involve the infamous Pew Group! What in the world does he have up his sleeve!?  Will it ever come out that Doreen tripped her husband? Guess you'll have to read it to see! You won't be sorry.  A really fun read and delightful plot-line.

Peggy Ann
Posted by Peggy Arthurs at 9:28 AM