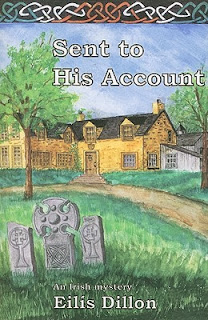 from the back cover:
Murder in an Irish village told with style and wit

Miles de Cogan is an impoverished Dublin bookkeeper who is overjoyed to find that he has inherited the prosperous County Wicklow estate (and title) of his late cousin, a baronet. A kind and generous man, Miles decides to put some of his progressive ideas into practice and turn the village flour mill into a cooperative, a plan that's enthusiastically welcomed by all involved, but it gets put on hold when his overbearing neighbor, Tom Reid, is murdered. Reid's plans to build a roadhouse had incurred the wrath of everyone in Dangan, and when Inspector pat Henley of the Irish Guards arrives on the scene, he finds more suspects than he can handle. Full of Irish wit and color, it's this distinguished author's second mystery, first published in 1954.

This is the third mystery I've read by Eilis Dillon and I've loved each one. This is probably the best of the three. She only wrote three mysteries. Too bad for us!

In this story, Miles, who came from a family of substance but had lost it all when Miles was young, inherits from a cousin he didn't know. Miles is a good, kind, humble man and I liked him. I kind of wish there were more books about him and his life after this one! Very shortly after Miles arrives to live in Dangan, Tom Reid, who is hated by all, is murdered. But sadly for Miles he's found dead in Miles' library. There are lots of interesting characters in this story and a lot of red herrings. Very well plotted.

As a cow lover my affection for Miles was set with this:
'Halfway along the drive he asked Barne to stop for a minute and switch off the engine. He wanted to listen to the silence, so still at first, but then full of birdcalls and the bleating of sheep and lowing of cattle. Presently he pointed into the distant fields and asked:
"Do I see deer over there?"
"Jersey cattle," said Barne. "Cousins to deer. They are yours, too. I forgot to mention them. Sir Miles always kept about forty of them."
It was many, many years since there had been a cow in Miles' family. His bliss was now complete.'

In addition to Miles a list of some of the characters:

Mr. Barne. A Dublin solicitor, a dried-up little stick of a man, who was the late baronet's agent and breaks the welcome news to Miles.

Tom Reid. A Prosperous, overbearing and almost universally disliked Dublin accountant and entrepreneur who makes his home in the village of Dangan.

Martin Doyle. The owner of the village flour mill, who loves Jane Merlin.

Joe Connolly. The middle-aged hotel barman, a hothead, like Doyle

Paul Walsh. The onwer of the village hotel, a bit slow on the uptake.

Mrs. Henley. A grocer, one of Miles' clients, as kindly as she is massive.

This book was republished by Rue Morgue. I have yet to read one of their books that I didn't like.