Just got home from a little road trip (217 miles one way- 4 hr. drive) over to the kids house in Maryland. I went by myself for 3 days. They live in Maryland but just minutes from the Pennsylvania line so you are always jumping in and out of two states. The closest 'town' is Waynesboro, PA. named after General Anthony Wayne and played a part in the Gettysburg campaign. Civil War sites and memorabilia is surrounding the kids where they live. Funny thing is when I was small my family lived in nearby Blue Ridge Summit (birthplace of Wallis Simpson, that femme fatale that caused a king to abdicate for her!) about 5 miles from Paul's house and we did our shopping in Waynesboro! Aside from battling a nasty headache that didn't want to give up we had a really nice restful visit. These works of art were waiting for me on the chalk board in Isa's room... 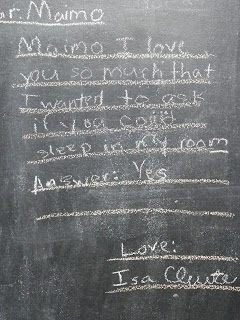 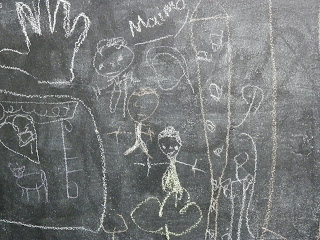 Ian drew these pictures of Me on the bottom, Grandpa in the middle and the white haired grandma (my mom) at the top.

The debate about where I was going to sleep started immediately. I usually sleep on an air mattress in Isa's room as it's larger. Ian wanted me in his room this time. But alas Isa's room won out again as it is bigger. Daddy put both of their twin mattress' off of their beds side by side on the floor and we all three sleep there with the dog at the foot and taking turns on who slept in the middle. I don't:) But Isa is a bed hog and only got the middle one night because of it! Ian actually slept at the foot of the bed the last night to lay next to the dog.

One day we went to the park and then out to dinner for chinese and home for a movie night. They have surround sound and we pull the couch up in front of the TV like we were at the movies and watched 'Rise of the Guardian'. Great fun and a very good movie. Now we know where Jack Frost came from!

Another day we went to the library and got library cards and checked out books. The library is in an old house and it is so cool! Beautiful stairway inside!


Then roamed around charity/thrift shops. I found these for the summer... 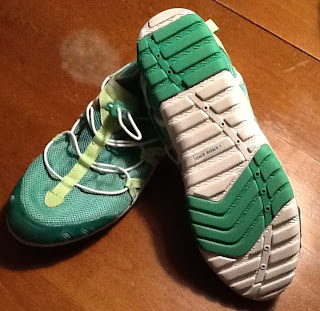 Lands End water shoes, brand new! Yes, they are an ugly color but hey beggars can't be choosy and I am thrilled with my find! I got 4 books, Ethan Frome by Edith Wharton, A Dedicated Man by Peter Robinson and two Ann Purser books - Murder on Monday and Murder on Tuesday.

They have their very own cemetery! 4 graves are in it. It dates in the 1830's


Isa was our picture taker so she isn't in any of them! It was hard to leave them, but it will be nice to sleep in my own bed tonight! Speaking of which I am off to it right now! Good night all.
Posted by Peggy Arthurs at 8:34 PM

Email ThisBlogThis!Share to TwitterShare to FacebookShare to Pinterest
Labels: family