I picked up an interesting book today at the Humane Society Charity Shop, Time Will Darken It  by William Maxwell. Written in 1948. I had never heard of this author but something on the cover made me search for info on him and his work. I can't wait to get started on this book and to find others by him.

He was an American novelist (6 novels), short story writer, essayist, children's author (2 children's books), memoirist, and editor; he served in 1936-1975 as fiction editor for The New Yorker. He won the Newbery Honor in 1947 for The Heavenly Tenants. So Long See You Tomorrow is considered his masterpiece.

He was born in Lincoln, Illinois in 1908 and lost his mother to the great flu epidemic of 1918. His fiction has recurring themes of childhood, family, loss and lives changed quietly and irreparably. Much of his work is autobiographical, particularly concerning the loss of his mother when he was 10 years old growing up in the rural Midwest of America. After the flu epidemic, young Maxwell had to move away from the house where he lived at the time, which he referred to as the "Wunderkammer" or "Chamber of Wonders". He wrote of his loss "It happened too suddenly, with no warning, and we none of us could believe it or bear it... the beautiful, imaginative, protected world of my childhood swept away."

Maxwell was by all accounts a very quiet, humble man who found it very hard to market himself or be in the limelight. One co-worker described him as 'melancholy minded', that his mother's death had an enormous impact on him, leaving him with an awareness of the fragility of human happiness. I am intrigued by his story and eager to read his work!


Here is a good article about him and here


It appears it is difficult to find The Heavenly Tenants. The Book Depository refers you to Abes Books and it is $80 there! I did find some used at Amazon... 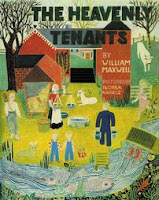 Have you heard of him or read any of his books? What did you think?