I Am Now a Moosepathian! 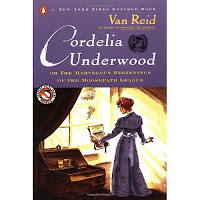 Cordelia Underwood: Or the Marvelous Beginnings of the Moosepath League

'Curl up in your favorite armchair and step back in time to Portland, Maine, in 1896 as Van Reid spins the first in his series of enthralling, amusing novels. When the young, beautiful, redheaded Cordelia Underwood inherits a parcel of land from her seafaring uncle, it sets in motion a chain of events that leads to the unearthing of a family secret two centuries old. Cordelia soon crosses paths with Mister Tobias Walton and finds herself aided in her quest by the warmhearted gentleman, who has never heard of an adventure he isn't eager to join. Together with his hapless trio of friends, the Moosepath League, they embark on an entertaining and audacious escapade. Teeming with wonderment, romance, and adventure, Cordelia Underwood is storytelling at its most delicious.'

This is a delicious story! I am hooked! The Moosepath League is entertaining and endearing. I've ordered all the books! There are 6 in the series, written from 1999-2012. You can order this book by clicking on the link above or here... Moosepath League Books!

or at The Moosepath Press

This whole story takes place in just 12 days. Cordelia Underwood and Tobias Walton meet at the wharf in Portland Maine. Subsequently, Mister Walton meets Eagleton, Ephram and Thump - 3 unusual gentlemen starting a new club. The story then breaks off into 3 running story-lines. We find out how Tobias becomes involved with the Moosepath League and goes off on his adventures with and without the League and Cordelia and her family go off on their adventure to solve the puzzle her uncle left her in his will. Each adventure more or less alternates with each chapter seamlessly, in the end converging into one great story. It was ingenious writing. Like 3 stories for the price of one! 400 pages, long time to get to the point in a story isn't it, you ask? Not at all! Not a boring moment in the book, just lots of rollicking fun and wonderfully unique characters. I laughed out loud often and can't wait to go on more adventures with Eagleton, Ephram, and Thump and their beloved chairman, Tobias Walton and his man, Sundry Moss.

Cordelia's adventure:
Her uncle Basil's trunk is mysteriously delivered to them several years after his death. In it is a deed for some property in the north west corner of Maine, at the foot of Mt. Katahdin. Cordelia's name is on the deed! There is a cryptic clue included concerning something that is buried there at the property. Basil was a seafaring man, could it be buried treasure? Who is John Benning, the youngman whom she met the same day she met Mister Walton on the wharf? And does he seem to be following her? Is he really interested in her or her mysterious inheritance? What kind of trouble pops up on the arduous trip to her property? Remember this is 1896 and this part of Maine wasn't settled then. Who is this scout/guide, Dresden Scott, hired by her father to take them there? Is he really a guide or in on the plot that seems to be gathering to bring harm to her? Will there be romance on the trail?

Mister Walton's adventure:
A wild ride on a horse drawn wagon thru the center of town. What is in the crates on the wagon? Mister Walton isn't sure its even legal!
Mistaken identity involving a bear hunt! Maude, a circus bear, has escaped into the woods. The towns people mistakenly take Mister Walton for the big game hunter sent to capture Maude. A hilarious, slap stick romp in the woods begins! Then there is the voyage out to find the sea monster!
The Moose running down a hill with red long underwear on his antlers and three strange men running and stumbling after it.
The hilarious introduction of the 3 Moosepathians to Mister Walton's new right hand man Sundry Moss (whose twin brother is named Varius, by the way!)  Varius and Sundry :)
And the final grand adventure that brings all three lines together!

There are a few books mentioned as being read by characters too, which is always fun for me. I did find 2 of them available in digital for free.

And of course places visited in the book are real places in Maine with lots of great history! The Shell Heaps are here and here and Fort Edgecomb here.

If you love to laugh, like Maine, and enjoy going back in time then this book is for you!

Here are a couple excerpts from the book for you to sample!

'As referee, Thump had not the slightest idea what was expected of him....'Give the word, sir,' said John Benning to Mr. Thump. Thump hadn't the slightest notion what that word might be. He considered saying 'Ready, aim, fire!' but this seemed out of place. 'On your mark, get set, go!' was equally inappropriate. finally, he shouted, like an emperor at the Colosseum, 'Let the game begin!' and tripped in his hasten to remove himself from harm's way.'

'The young woman looked nothing less than a vision dressed in white and green, her red hair let down upon her shoulders. Delia was struck by this sight of her great-niece, there was such an air of romantic distraction about the girl as she shuffled the leaves of past autumns still wet with the night's storm. Delia was also struck by the fact that she knew next to nothing about John Benning, the man with whom Cordelia had dance almost the entire night.'

'Stand back, Sundry!' commanded the bespectacled gentleman, and as he squinted past the rifle's sights, he was astonished to see the bear tuck her head between her forepaws and raise her hindquarters into the air. Gaping up where he fully expected to behold gnashing fangs, he saw instead a pair of swaying bear's feet. Lowering his gaze to Maude's face, his eyes grew wider still, and he said: 'Good heaven! She is standing on her head!' 'What is it?' cried Sundry, as if he had been pinched. He was scrambling now, back up the bank an through the trees. 'Good heaven!' said Mister Walton again. 'She's smiling at me!'

'He left with Sundry Moss,' said another boy... The three men could not understand it; purportedly Mister Walton had been on a bear hunt, during which he did not shoot a bear, but caused one to stand on its head; he then came near to violence with a large group of men, and left town with a variety of mosses....Thump looked distressed, but he was only thinking -attempting to picture Mister Walton in a carriage with stacks of assorted mosses on the seat beside him. 'Perhaps they're for medicinal purposes,' he ventured.

P.S. You can do a jigsaw puzzle online of the Portland Wharf here!

Posted by Peggy Arthurs at 4:24 PM