The Visit by Beverly Cochran

Book Description
'The Visit is about a visit to the secret world of the north east coast of Scotland. We accompany Charles, a sophisticated English business man gone to Cuilly to see his son who is living there on social security and with him meet the surprising variety of people who live there, including the glamorous American Patti and her visiting sister and the aged local fishers, retired teachers and weekenders who make up the population. We share some of the hardships of coastal life with him until the disappearance of Jack the local hero, friend to all brings Inspector Sim to the tiny village to unravel the mystery. He is not making much progress when cheery funeral wake is disrupted. Jack's body has been found, but where has he been and how did he get there and who was responsible. Everyone has a theory but it is deaf old Flora who holds the major clue as Inspector Sim painstakingly puts the jigsaw together and solves the puzzle.'


This is the second of only 2 books written by Beverly Cochran. I reviewed the first book 'The Housekeeper' last year. They must have had a limited printing because they are hard to find at a decent price. I got my copy of The Visit at Amazon for $13.43 but everywhere else I looked it ranged from $24 - $103!

I really enjoyed this book as well as The Housekeeper. Ms. Cochran portrays the Highland characters with affection. There are wonderful descriptions of the landscape, quirky people, gentle humor, a nice little mystery to solve and engaging Doric dialog. You have the closeness of the village residences while at the same time tapping into the underlying distrust of the 'incomers'. Even Jack, the village hero, whose family have lived in the house he and his wife live in for centuries, is considered an 'incomer' because he was born in England. Ms. Cochran herself is an 'incomer' so she has the inside scoop! When Jack goes missing all these little grievances bubble up to the surface. Will the village ever be the same when the mystery is solved? Did an outsider or one of their own have something to do with Jack's death? Who painted 'Go Home English' on Beth's house? Will Charles and Patti get together? Will Charles and Edward's father/son relationship improve? Will Beth and the kids stay in Cuilly, or will the other residences drive them out?

I am not familiar with this locale so it was a little hard to visualize the scene when reading. There were bank-heads, sea walls and hills and dangerous paths, winding roads and having to walk 'up' to garages to get to their cars. Cuilly and Trimmery are fictional towns but several real towns are mentioned as being visited close by so I looked up pics of those to get a visual in my head. This is the setting this story is set in... 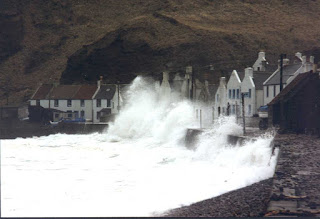 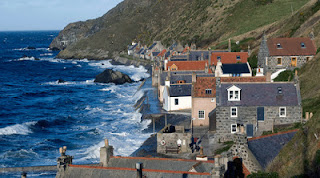 Here's a sample of the Doric dialogue...

Beverly Cochran was born in Liverpool and educated at Manchester University. She worked in Chicago, Salford and London in publishing and teaching. Head hunted from Pimlico to Peterhead to be the first woman teacher in Scottish prison, she adapted to life within the walls of the maximum security prison. Here she learned to understand the Glassgow patter. At the same time in the fishing town she learned the local Doric speech. She wrote a book about her Inside Job which was highly praised by Lord Longford. She then married a solicitor who was the laird Balfour, a small estate in royal Deeside another world altogether and became a full time writer while raising five step children and a baby son of her own. Her first novel The Housekeeper was successful and she cooperated with her brother in turning it into a film script. Beverly Cochran is an extraordinary story teller who mixes singular life experience with a potent imagination and a wry sense of humor. People who meet her never forget her.


Beverly's books were written 11 yrs. apart. Maybe we'll be seeing another one soon? I hope so!

Peggy Ann
Posted by Peggy Arthurs at 10:28 AM