The Shadowy Horses by Susanna Kearsley 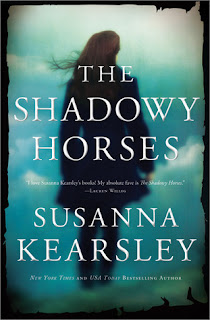 THE INVINCIBLE NINTH ROMAN LEGION MARCHES FROM YORK TO FIGHT THE NORTHERN TRIBES. AND THEN VANISHES FROM THE PAGES OF HISTORY.

Archaeologist Verity Grey has been drawn to the dark legends of the Scottish Borderlands in search of the truth buried in a rocky field by the sea.
Her eccentric boss has spent his whole life searching for the resting place of the lost Ninth Roman Legion and is convinced he's finally found it—not because of any scientific evidence, but because a local boy has "seen" a Roman soldier walking in the fields, a ghostly sentinel who guards the bodies of his long-dead comrades.


"Brooding and atmospheric. .. lovers of all things Scottish are going to adore this work." —RT BOOK REVIEWS

"Ms. Kearsley has woven archaeology, history, mystery, the paranormal, and love together, to create a wonderful story." —RENDEZVOUS


Little Robbie has the second sight. He says he sees a Roman sentinel walking the grounds of Rosehill. Verity hears horses galloping in the night. Kip the dog seems to run out to greet someone who isn't there. Could there be such a thing as second sight? Or is it their imagination?

I really enjoyed this novel! The archaeology aspect and the history of the Roman legion were very interesting. The 'eccentric' boss was a wonderful character. There is a past romantic relationship going on and a new romantic relationship warming up. There's a beautiful estate, lots of whiskey drinking and smuggling going on. A long kept secret, will the truth come out? Someone keeps sabotaging the computers. Is it a real person or the ghost?

On top of all this there's the history of the town of Eyemouth, Scotland. Verity goes to a museum in town and learns the history of a terrible disaster that devastated the town in 1881. There is a beautiful woven tapestry in the museum to commemorate the disaster, the Eyemouth Tapestry. I looked up Eyemouth on my trusty map of Scotland and it is a real town! So I looked up the disaster and low and behold it really happened too and there really is an Eyemouth Museum and the tapestry! It has nearly 1,000,000 stitches in it and was done by 24 local women. There is a house in the story too that smugglers used in the old days, Gungreen House. It's real too and you can rent it out now for a vacation rental. At one time it was the hot bed of tea smuggling in Scotland. All this just adds to the story for me.

I loved the characters and the plot was well done. I had a hard time putting the book down and was sorry when I finished it. This is my second book by Susanna Kearsley and I loved them both. Check her out!

If your interested in the Eyemouth Museum and the great disaster of 1881 check it out here. This is on my list of places to see for sure!

Susanna is also a Canadian so this book counts toward my Canadian Book challenge!
Posted by Peggy Arthurs at 8:27 PM