Beneath the Abbey Wall by A.D. Scott 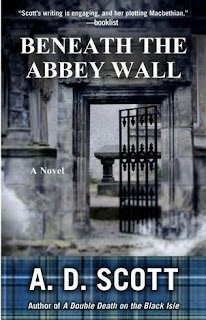 AS A DECADE OF CHANGE COMES TO A CLOSE, MURDER HITS CLOSE TO HOME IN A SMALL SCOTTISH TOWN. . . .   On a dark, damp Sunday evening, a man taking a shortcut home sees a hand reaching out in supplication from a bundle of sacks. In an instant he knows something terrifying has happened.
In the Highlands in the late 1950s, much of the local newspapers success was due to Mrs. Smart, the no-nonsense office manager who kept everything and everyone in line. Her murder leaves her colleagues in shock and the Highland Gazette office in chaos. Joanne Ross, a budding reporter and shamefully separated mother, assumes Mrs. Smarts duties, but an intriguing stranger provides a distraction not only from the job and the investigation but from everything Joanne believes in.
Beneath the Abbey Wall brilliantly evokes a place still torn between the safety of the past and the uncertainty of the future, when rock n roll and television invaded homes, and a change in attitudes still came slowly for many. As the staff of the Highland Gazette probes the crime, they uncover secrets deeply rooted in the past, and their friends murder becomes the perfect fodder for strife and division in the town and between her colleagues.

What can I say... Ms. Scott did it again! In this third installment of the 'Highland Gazette' series we are transported back to 1957 to the small town in Scotland and a visit with the staff of The Highland Gazette! I've been waiting a year for it and I wasn't disappointed!

Mrs. Smart wasn't really a key player in the last two books, just a background character. This book she gets front and center even though she is dead. We learn a lot about her and her past. Don McLeod the paper's Deputy Editor is arrested for her murder! Unbelievable! What is his connection to her? You will be surprised! And what does the tragic tale of Tinker's children being stolen from them 30 years ago have to do with this? Can Mrs. Smart's invalid husband really get around better than we think and could he have done this dirty deed? Who is this Neil Stewart from Canada and how will he impact Joanne Ross' life? Poor Mac, can he & Rob find evidence to exonerate Don and will he ever tell Joanne how he feels about her? Will the Highland Gazette even survive through all of this?

If you haven't read the first two books in this series, 'A Small Death in the Great Glen' and 'Double Death on the Black Isle' you can still enjoy this one as a stand alone mystery. But, believe me you'll want to get both of these other books and start at the beginning to get to know the characters and become involved in their lives. And just like the first two books at the very end a shocking surprise that leaves you stunned!


"Beautifully written and atmospheric, Beneath the Abbey Wall transports the reader to the bleakness of Scotland after World War II. This has everything I enjoy in a book: a terrific sense of place, real people, complicated relationships and a suspenseful peeling away of layers of back-story.”
-- Rhys Bowen, New York Times bestselling author of Hush Now, Don't You Cry
"Scott vividly evokes Scotland of the period…The well-drawn characters, who come from a range of backgrounds, give a broad view of the social milieu.”
-- Publisher's Weekly
“A plot that’s ingenious, characters that are both believable and surprising, and evocative Highlands atmosphere make this another must-read.”
-- Booklist (starred)

The North Sea Requiem  due out in September 2013

Description from the publisher's page...

The fourth gripping, evocative, and lyrical mystery in the acclaimed series that brilliantly evokes the Scottish Highlands of the 1950s.

A. D. Scott’s extraordinary mystery novels have been called “beautifully written and atmospheric” (Rhys Bowen, New York Times bestselling author of Hush Now, Don’t You Cry), “a visit with an old friend in front of a fireplace on a cold wintry night” (Suspense Magazine), and “must-reads” (Booklist). In her latest, Scott pits the staff of the Highland Gazette against their greatest adversary yet in a mystery that her fans will relish.

When a woman discovers a severed leg in the boot of one of the local hockey player’s uniforms, it’s a big scoop for the Highland Gazette. But reporter Joanne Ross wants a front page story of her own, and she hopes to find in Mae Bell, an American jazz singer whose husband disappeared in an aircraft accident five years ago and who is searching the Highlands for her husband’s colleagues.

Things take a very sinister turn when Nurse Urquhart, who discovered the severed limb, suffers a hideous and brutal attack. Even stranger, she was the recipient of letters warning her to keep her nose out of someone’s business—letters that Mae Bell and the staff of the Highland Gazette also received. What could it all mean?

Unfolding against a gorgeously rendered Scottish countryside, North Sea Requiem captures the mores and issues of another era, especially in Joanne Ross—a woman wrestling with divorce, career, and a boss who wants to be more than just her superior. The result is a poignant, often haunting mix of violence, loss, and redemption in a narrative full of unnerving plot twists and unforgettable characters.

You'd better get started on book one if you haven't read them yet!

Fantastic Fiction has a link to all the places you can order 'Beneath the Abbey Wall' as well as the other two books!

Posted by Peggy Arthurs at 8:06 AM