The Moving Toyshop by Edmund Crispin

The Moving Toyshop is a comic crime novel by Edmund Crispin, published in 1946.

Book description:
Gervase Fen, Oxford Professor of English Language and Literature, claims to be 'the only literary critic turned detective in the whole of fiction'. The genial eccentric could also claim to have placed Edmund Crispin, with Dorothy Sayers and Michael innes, on the recommended reading list for bishops, judges and cabinet ministers, present and future.
The toyshop in the Iffley Road contains the strangled body of a grey-haired woman when a friend of Fen's enters it one night. The next morning the toyshop has vanished and a busy grocer's store occupies the site. And nobody's surprised.
It's like investigating a crime that hasn't happened. That suits Fen.

I found this a rollicking fun read. Richard Cadogan is a poet who is finding it hard to write and needs a grand adventure to stimulate his creative juices. So off he goes to Oxford looking for it. The minute he hits town he finds it in the form of a murdered body. He is hit on the head and knocked unconscious. When he wakes up the body is gone. He goes to the police and they go with him to the toyshop and find it is now a grocery store. His old friend from college, Professor Gervase Fen joins in the search for the toyshop and the chase is on. The clues are found in an ad in the paper and a comic verse.

Full of quirky, interesting characters and a grand murder to unravel. Mr. Crispin's sense of humor is wonderful.
Example -
'Fen steps in,' said Fen. 'The Return of Fen. A don Dares Death (A Gervase Fen Story).'
'Murder Stalks the University.' said Fen. 'The Blood on the Mortarboard. Fen Strikes Back.'
'What's that your saying?' Cadogan asked in a faint, rather gurgling voice.
'My dear fellow, are you all right? I was making up titles for Crispin.'

Interesting book covers have graced the book over the years. Here are a few and a few places you can purchase the book. 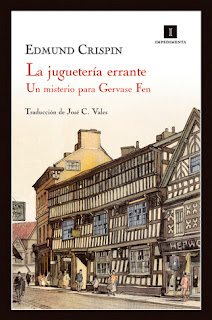 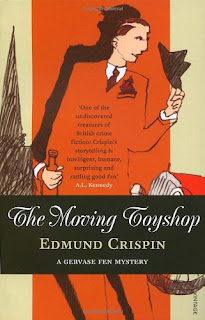 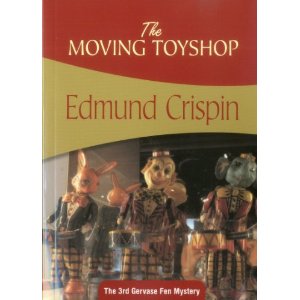 Posted by Peggy Arthurs at 7:54 PM