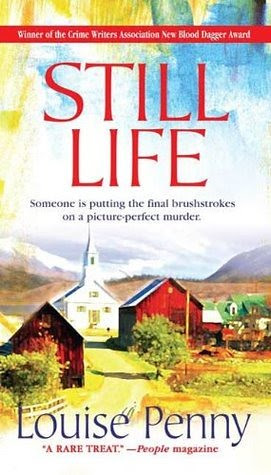 I'm a little late getting on the Inspector Gamache bandwagon. I just read my first Louise Penny book and I started with the first one in the series. I wasn't too sure about it at first, but it kept calling to me from the table to pick it back up and I ended up really liking it. I like Gamache and his partner Beauvoir. They have a real affection for each other and make a great team. The 'new' girl on the team, trainee Yvette Nichol, on the other hand is a terrible character. I was so happy when he told her to go home! Alas, I have been told she is back in subsequent books:(

The village residents really didn't do much to warm my heart in the beginning, as a matter of fact I thought 'am I going to like any of them, other than the dead woman?' But as they developed I really did like them even bitter old Ruth!

I thought the murder was a really interesting murder and Louise did a nice job of giving you reason to suspect everybody. I changed my mind several times right up until the very end. Good book, I'll moving on to book 2 soon!

From the book...
'Miss Jane Neal met her maker in the early morning mist of Thanksgiving Sunday. It was pretty much a surprise all around. Miss Neal's was not a natural death, unless you're of the belief everything happens as it's suppose to. If so, for her 76 years Jane Neal had been walking toward this final moment when death met her in the brilliant maple woods on the verge of the village of The Three Pines. She'd fallen spread eagle, as though making snow angels in the bright and brittle leaves.
Chief Inspector Armand Gamache of the Surete du Quebec knelt down; his knees cracking like the report of a hunter's rifle, his large, expressive hands hovered over the tiny circle of blood marring her fluffy cardigan, as though like a magician he could remove the wound and restore the woman. But he could not. That wasn't his gift. Fortunately for Gamache he had others.'

Posted by Peggy Arthurs at 9:49 PM