Power is out and Books are in!

My Thanksgiving pies should be in the oven! But at 7:30 this morning....
No electricity! They are putting in new drainage here. Digging right next to my house. Gas, phone, cable and electric lines running all thru the ditch. It was inevitable they would hit something! I'm just glad the pies weren't in the oven yet! It took an hour for the power company to get here. Hopefully they will get it back on soon. It's getting cold in here! 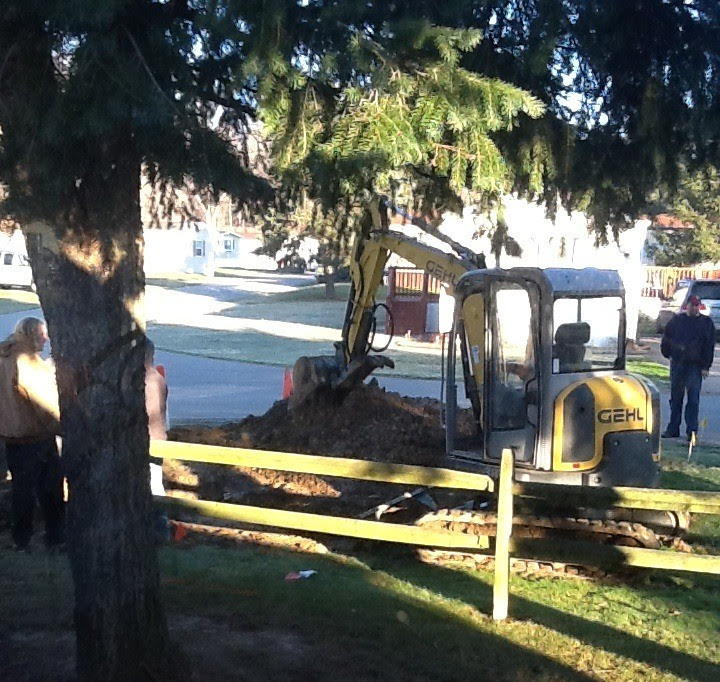 Looks like this is going to be quite a job by the amount of power co. trucks here (5) and men swarming all over my yard! 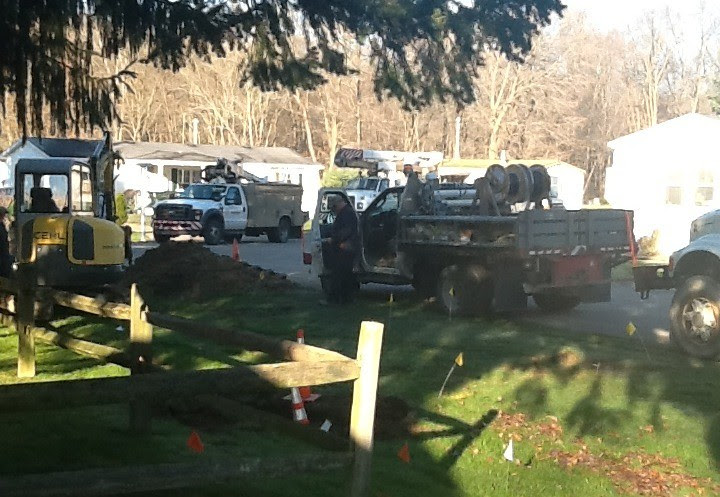 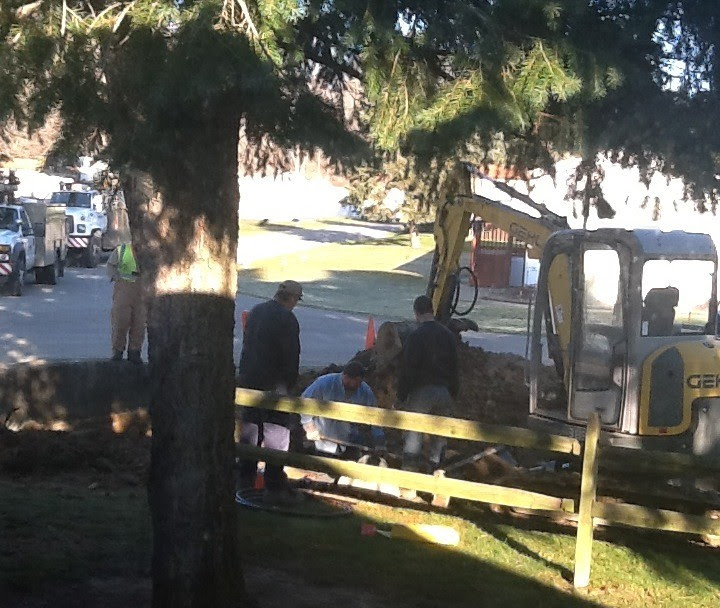 Typical, one guy working and the rest standing there watching! I'd make coffee for them if I had electricity! Too bad my grandson Ian isn't here to watch all this!


The mailman brought me 6 books this week. Five of them are Elisabeth Ogilvie books! Next year will be the year of Elisabeth O. for me. My goal is to find all of her books to add to my library. Her books are what made me fall in love with the state of Maine. Found this old Maine souvenir dish in an antique store in Wisconsin. 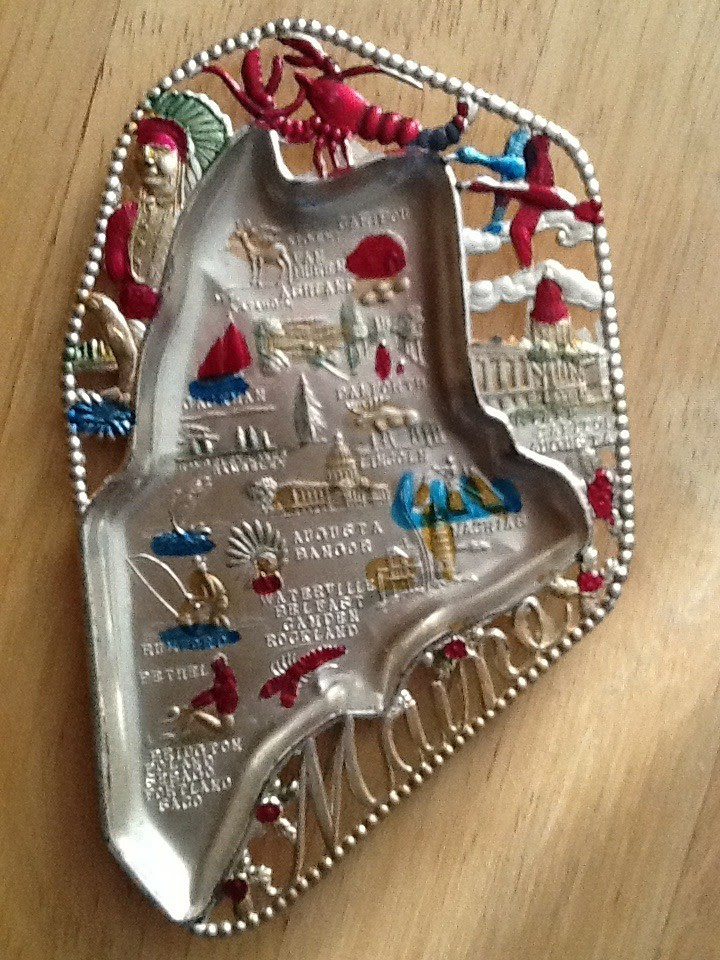 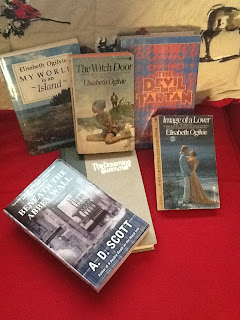 Back to the books... Elisabeth actually wrote quite a few mystery/suspense novels. I was unaware of this until I got the book 'A Mug Up With Elisabeth'. This book, written by two of her biggest fans - Melissa Hayes and Marilyn Westervelt, is the definitive resource on her life, work, characters and settings. (A mug up is having a cup of coffee in Maine island speak!) It's a wonderful resource for Ogilvie fans. Fills us in on her birth, (she is of Scottish descent) thru her growing up years and her life on the Maine islands and of course her writing. All of her adult fiction is listed and described (she also wrote many young adult novels) and at the back of the book we have lists of characters and what novels they appear in, animals in which books, flora and fauna, food served, music mentioned, games played, names of boats, locations and Maine terminology like 'williwaws' - nervous, 'crawl under the kelp'-go home and go to bed, 'parted your fasts' - lost your mind and a short list of Gaelic terms found in the novels. And of course a comprehensive list of everything she has ever written in the order of publication. There are 9 Bennett's Island books (my favorites!) 3 in the Jennie series (this trilogy starts in Scotland during the clearances thru Jennie's immigration to Maine) and 18 other novels 12 of which are mystery/suspense. Plus many more young adult books, short stories, an autobiography. There was even a film adaption of one of her novels, 'High Tide At Noon', in 1957. It was done by a UK film studio and filmed in Nova Scotia. Netflix has it on instant play!

'My World is an Island' autobiography, 1950, second edition published in 1990 with epilogue and photos.
"The unusual thing about this book," says Miss Ogilvie, "is that I had no idea of doing it. - Now I find it a good history of a significant period of my life, when I was first daring to think of myself as a professional writer. And it is a memorial to the persons I have loved and lost. Perhaps it's strongest feature is its quiet and gentle tone, that and the way it makes the island the chief character in the book."

'The Devil in Tartan' 1980 This book was inspired by her family history. It tells the saga of a family's history from the battle of Culloden in 1746 to its eventual emigration to Nova Scotia, Canada.

'The Witch Door' 1959 Megan finds herself at a crucial turning point, her husband Craig abandoned the family 7 years ago. Now her longtime friend Richard has proposed to her. Should she divorce or have Craig declared dead and get on with her life? As suddenly as he left, Craig reappears and acts as if nothing happened. She begins to fear him, and especially for Richard. Where has he been for 7 yrs.? Will she stay with Craig? Her decision will bring heartache, damage other families, and ultimately cost someone's life. Craig is hiding a deadly secret. Megan must find a way to save her children, her love for Richard and herself.

'Image of a Lover' 1974 Jealous fury took an unexpected turn, casting clouds of fear and madness across Seafair Bell and Miranda Muir's golden summer on Drummond Island. This is perhaps the darkest of Ogilvie's novels. It's terrifying portrayal of love turned to jealous insanity is utterly convincing and utterly heartbreaking. A gothic romance set on a remote Maine island at the turn of the century.

'The Dreaming Swimmer' 1976 This novel is a sequel to 'Weep and Know Why' which I somehow managed not to order and thought I did! Next order:) it continues the story of Mirabelll and Barnaby Taggart, now married and living at Cape Silver. A stranger buys the old Darby house, refusing any overtures of friendship and closing himself off from the rest of the world. Barnaby's 19yr. Old niece refuses to accept his refusal of friendship and believes she is making inroads toward friendship, until his house burns down and he disappears. One violent action follows another, making the entire community unsure of just whom to trust. Everyone tries to solve the mystery of what happened to Cory Sanderson - until one afternoon on Cat Island, when the action reaches a dramatic crescendo. Ogilvie is at her best in this chilling novel of suspense, which contains enough twists and turns to satisfy any mystery reader.

The power is back on guess I have to get in the kitchen!

Peggy Ann
Posted by Peggy Arthurs at 11:41 AM