Episode of the Wandering Knife by Mary Roberts Rinehart 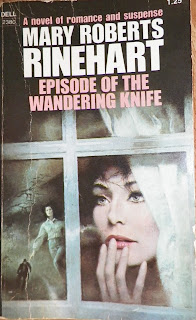 
Another great book by Mary Roberts Rinehart! This one has 3 stories in it. Two longer and one short. One is a Hilda Adams story, there are a total of 5 featuring her.

The first story is The Wandering Knife and it is 114 pages long. I read it in one day. Couldn't put it down. Judy's mother had a huge party, one last fling in the family mansion before the government took over as she had offered it to them for use as a convalescent home. This is set during World War II. Because the Mayor was there they had very tight security. Yet when her son Larry went home to his house on the estate he found his wife dead in the hallway. Murdered. And so begins the journey of the wandering knife. Literally. The murder weapon in this case is a hunting knife and it goes on some strange ramblings. Just never know where or how it is going to pop up next! Will the police finally get it? Who would want Isabel, a sweet and innocent girl by all accounts, dead? What is the chain and tassle found underneath her all about? Who is the strange man her chauffeur saw her meet in the park on numerous occasions? What really was going on between her and her first love Donald Scott? How does the little lady in the purple hat, who brought the knife back once, fit into this? And just who is this Tony King who keeps showing up with info and questioning Judy, yet protecting her at the same time? Will there be more murders? Will there be romance?