The Dog Who Wouldn't Be by Farley Mowat 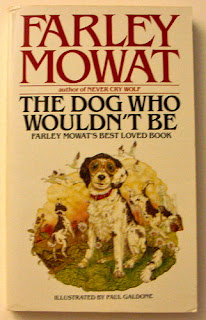 from the back of the book:
Farely Mowat's best loved book tells the splendidly entertaining story of his boyhood on the Canadian prairies.  Mutt's pedigree was uncertain, but his madness was indisputable.  He climbed tress and ladders, rode passenger in an open car wearing goggles and displaying hunting skills that bordered on sheer genius.  He was a marvelous dog, worthy of an unusual boy growing up a raw, untamed wilderness.

This was a wonderful story! I laughed out loud through most of the book. Mowat tells the wonderful tales of his odd dog, Mutt, in the most uproarious ways. Not quite sure if they are all completely true, but they are hilarious at any rate!

Mowat's father took a job as a librarian in Saskatoon Saskatchewan at the height of the depression. The Canadian prairie was in the midst of a horrible drought. One day a small boy appeared at the door trying to sell baby ducks and had this odd looking puppy with him. It ended up that Farley's mom bought the dog for 4 cents instead of the ducks. And thus began the tale of Mutt.

'There was about him, from the first day he came to us, an aura of resolution and restraint, and dignity. He took life seriously, and he expected us to do likewise. I suspect that at some early moment of his existence he concluded there was no future in being a dog. And so, with the tenacity which marked his every act, he set himself to become something else. Subconsciously he no longer believed that he was a dog at all, yet he did not feel, as so many foolish canines appear to do, that he was human. He was tolerant of both species, but he claimed kin to neither.'

Then there was his appearance...
'In size he was not far from a setter, but in all other respects he was very far from any known breed. His hindquarters were elevated several inches higher than his forequarters; and at the same time he was distinctly canted from left to right. The result was that, when he was approaching, he appeared to be drifting off about three points to starboard, while simultaneously giving an eerie impression of a submarine starting on a crash dive...His eyes were so close-set that he looked to be and may have been, somewhat cross-eyed... An even more disquieting physical characteristic was the fact that his hind legs moved at a slower speed than did his front ones. Yet, despite all of this, he had a handsome black and white coat of fine, almost silky hair with exceptionally long 'feathers' on his legs and a long expressive tail. A black mask covered all of his face except for his bulbous nose, which was pure white. He was not really handsome, yet he possessed the same sort of dignified grotesquerie which so distinguished Abraham Lincoln and the Duke of Wellington.'

'He also possessed a peculiar savoir-faire that had a disconcerting effect upon strangers. So strong was Mutt's belief that he was not simply 'dog' that he was somehow able to convey this convection to human onlookers.'


The first little episode with Farley's mom and Mutt on a shopping trip to the main department store in town is absolutely hilarious! And it only got better from there! Farley and his dad decided to try Mutt at duck hunting. He didn't like the oily taste in his mouth that the ducks left and chasing cows was much more fun. But in the end he became a great hunter of birds, just not like any other conventional retriever I've ever seen! And there was the time he wouldn't come out from under the garage...his fur was blue! He was too embarrassed! An why he learned to walk on top of the fence's like the cats...You have to read this book for yourself. It's a great story to read with children.

Farley Mowat was born in Belleville Ontario in 1921. He was a great-great-nephew of Ontario premier, Sir Oliver Mowat. His father, Angus, was a librarian and enjoyed minor success as a writer himself. Farley is a conservationist and one of Canada's most widely read authors. His book 'Never Cry Wolf' was made into a movie and has been criticized as being a sham. Read about it here. He also has won awards and honors though. He was made an Officer of the Order of Canada in 1981 and the Sea Shepherd Conservation Society ship RV Farley Mowat was named in honor of him. He also received a star on Canada's Walk of Fame in 2010.


This post is linked to the Canadian Book Challenge @ The Book Mine Set.
Stop over and see what's happening in Canadian literature!

Posted by Peggy Arthurs at 5:30 AM