Death in the Quadrangle by Eilis Dillon 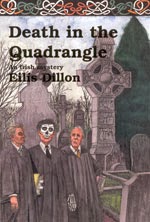 Up to the letter Q in Crime Fiction Alphabet! Stop over and see what else is going on with the letter Q.


This is the third in a series written in the 1950's by Irish author Eilis (aye-lish) Dillon. Eilis' son said they are best read in sequence but, I read the first one, 'Death at Crane's Court' (see my book report here) and jumped to this one as I needed a Q in my title! Ms. Dillon only wrote 3 mysteries in the 50 books she had published. What a shame, I enjoyed them. They are light, sardonic and slightly satirical. Writer and editor, Anthony Boucher said of the first mystery 'Death at Crane's Court', 'long on charm and short on detection', but I found them well written and a great picture of the Ireland of more than 50 years ago. All three of these books have been reprinted by Rue Morgue Press.

'Death in the Quadrangle' is set at a University and involves, of course, professors. An environment Eilis knew well, as both her husbands were professors.

Professor Daly, whom we first met in 'Death at Crane's Court', has been called out of his comfortable retirement at Crane's Court to deliver a series of lectures at his old college, King's College, in Dublin. He is surprised to discover how little he has missed academia and how eccentric, not to say vicious, his former colleagues now seem to him. Once there he finds out the real reason he has been invited to give lectures, Professor Bradley, the new president of the university has been receiving death threats and he wants Daly to get to the bottom of it for him. Bradley is disliked by everyone. He does not want the Guarda brought into it. But Daly calls in his old friend Inspector Mike Kenney (we also met him at Crane's Court!) to help him, incognito. Of course before they can find out who is sending the threats Professor Bradley is found dead in his bed. Poisoned, with Nitrobenzene. It could be anyone of the people in his life. He was mean, selfish, arrogant...you get the picture and more than one of them have threatened to kill him.

Professor Milligan is a chemist (and a kleptomaniac!) and can make Nitrobenzene in his lab.
Sodia Milligan, his independent minded daughter is a medical student and busy seeing that the things her dad steals get back into the hands of the owners.
Professor Delaney is quite mad and sees rats everywhere.
Helen Bradley is the long suffering wife and what exactly is between her and Daly? There's something from the past he doesn't seem to want Mike Kenney to know.
Professor Fox seems to be Bradley's only supporter, but is he really?
Professor Burren is a mean-spirited man and detests Bradley more than anyone and makes a point of showing it.
Professor Badger is a melancholy man with a large unruly family.
Professor Hamilton is a short, placid and cheerful man who fully intends to marry Sodia
Throw in Mr. Leahy, the wealthy Irish-American who intends to donate a large sum of money to the college. But what are he and Bradley really up to?
and Jennings the aged porter and compulsive sycophant and it could be anyone!

On the side we have a counterfeit ring under investigation by Inspector Kenney and his men. Does that figure into the death of Bradley?

I never picked up a single clue in this mystery so I'm not really sure there were any or if I just missed them. But it was a satisfying read for me. I am looking forward to reading the last one (well really the second one!) 'Sent to His Account'.

Eilis' son, Cormac O Cuilleanain is the author of two crime novels published under the name of Cormac Millar. He also is a professor! He writes a beautiful introduction to his mother and her life and works in 'Death in the Quadrangle'.

Seamus Joyce has got a few things on his mind. He has just been appointed Acting Director of iDEA, the Irish Drug Enforcement Agency. His wife is in hospital, dying of an unidentified ailment. And he is starting to question the purpose of his own existence. It's a tricky time at iDEA: an ambitious new Minister for Justice is anxious to secure a few big scalps in the Dublin drug trade, and Joyce is expected to put himself on the front line of the fight. Soon he begins to suspect that the police, in league with the Minister, are bending the rules and he still doesn't quite understand what the rules are. Why is money being paid into his bank account from an unnamed source in Liechtenstein? Why are his phones being tapped? And why are troubled schoolgirl and a diminutive nun accusing him of being at the heart of a lethal conspiracy
The Grounds  January 31, 2007

King's College, Dublin, an ancient and thoroughly mediocre institution, is in crisis. It is also Seamus Joyce's alma mater. When Seamus is hired to provide a consultant's report on the university for a shadowy American consortium, he doesn't realize what he's in for: a poisonous brew of sexual intrigue, professional backstabbing, corruption, and murder.
In this book he uses the same location as his mom's book, 'Death in the Quadrangle'.
Posted by Peggy Arthurs at 6:44 AM