The world's largest mountain carving in progress. This gigantic carving of the American Indian legend, Crazy Horse, is located in the gorgeous Black Hills of South Dakota, the home of his Lakota tribe. When completed the Crazy Horse mountain carving will be 641 feet long by 563 feet high. Crazy Horse’s completed head is 87 feet 6 inches high. The horse’s head, currently the focus of work on the mountain, is 219 feet or 22 stories high.

We made a stop here on our way out to Idaho this last August. Dave wanted to see how far they had come since our last trip out there in 2004, I believe it was. It doesn't look like they got much further, but I'm sure all the blasting and the hauling away of all that rock takes lots of time. Since we were there last they got all of the horse part of the sculpture blasted and marked for work. The devil is in all the prep work I'm sure. Look close and you can see the white drawing of the horse's ear and eye on the rock. This sculpture began in 1948!

Crazy Horse sculptor Korczak Ziolkowski lived an amazing life. 36 years of which were dedicated to this sculpture. Korczak was a studio sculptor and his talent was noted when he did a sculpture of Paderewski for the 1939 New York World's Fair. He was asked to assist Borglum on the carving of the Mount Rushmore in 1939 and then spent 2 yrs. on a sculpture of Noah Webster as a gift to the city of West Hartford, Ct.  That project was embroiled in controversy, read about it here.  In 1934 he volunteered for WWII and ended up on Omaha Beach. After the war he was asked to do war memorials in Europe but decided to dedicate his life to the Crazy Horse Memorial. He arrived in the Black Hills in May of 1947 at the age of 35 and died here in 1982 at the age of 74. He lived at the foot of the mountain and refused any salary. He worked and lived alone, climbing the mountain many times a day working with rudimentary equipment, nothing like they use today! Much to his surprise he met and married a woman named Ruth and they had 10 children. All born at the mountain, Korczak delivering one them! He and Ruth instilled in them a love for the Crazy Horse vision and the children helped on the mountain as they grew up. Following his death 7 of the children decided to continue his work and work solely on the mountain. He is buried in a tomb at the foot of the mountain, on it's door an epitaph he wrote...
KORCZAK Storyteller in Stone
May His Remains Be Left Unknown 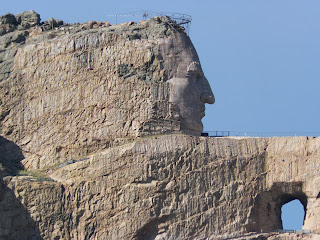 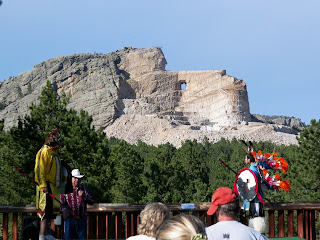 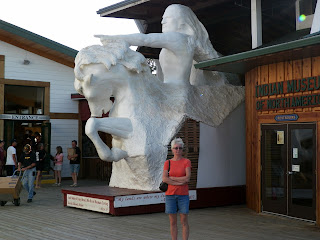 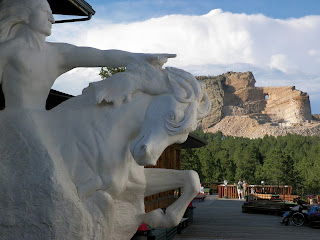 You can check out more on this subject and the fascinating job of mountain carving at the Memorial's website here. They also have a webcam that takes several shots each day. Now we don't have to drive that far to see how far they have come!


While there we stopped by Mount Rushmore too. This was our 3rd stop there. It is an amazing place and I highly recommend a family trip out there. There is lots to do in the area. Mount Rushmore has a wonderful visitor's center, an exhibit about the sculptor and the carving of the mountain, really beautiful hiking trails, a nice cafeteria where you can get bison meat! There is Custer State Park close by, really gorgeous. And of course the bison/buffalo are the highlight of the Park. A herd of 1,300 bison roams freely throughout the park, often stopping traffic along the 18-mile Wildlife Loop Road. The herd is one of the largest publically-owned herds in the world. You have to stop by Wind Cave while you are there! The cave is known for it's unique Boxwork formations. Check out the website for great photos of the cave!


Deadwood is also close, if you like old west history.

Mount Rushmore, a mountain carving of four of our presidents - Washington, Jefferson, Teddy Roosevelt and Abraham Lincoln, was carved by Gutzon Borglum and took 14 years to complete. Each of the heads is 60 ft. high. (and I have heard that all four of them would fit in Crazy Horse's head for comparison!)


Thanks for tagging along!

Posted by Peggy Arthurs at 9:56 AM