'Roanoke Island, North Carolina, the scene of historical dramas spanning over 3 centuries. Algonquians, European settlers, Civil War soldiers, and African Americans have played their parts. Between 1584 and 1587 England took its first steps toward settling North America, making three voyages of exploration and settlement to this island. During the Civil War, Roanoke Island was occupied by Union troops and hosted a settlement that prepared ex-slaves for a new life after the war. Radio pioneer Reginald Fessenden transmitted the human voice using wireless technology on Roanoke Island in 1902. Fort Raleigh National Historic Site preserves sites and commemorates the stories connected with these events.' from National Park brochure

We stayed on Roanoke Island in Manteo (pronounced man-e-o, the t is silent) named after an Indian that befriended the first settlers. Their were 3 voyages from England to Roanoke Island...

1584: reconnaissance - Sir Walter Raleigh was the force behind all the Roanoke Island voyages although he himself never stepped foot on the island. he won over investors and staked his own fortune on the venture. This first voyage was to explore to find a suitable place for settlement and to counter Spanish domination in the New World. In July two vessels arrived off the North Carolina coast and soon established friendly relations with the Algonquian Indians. After several weeks the English departed, taking Manteo and Wanchese with them back to England. Capt. Barlowe portrayed the New World as a wonderful place with 'kind and loving' natives and a benign environment, creating false expectations about the virtues of the land and readiness of its natives to accommodate newcomers.

1585: military outpost - In the spring, seven ships carrying 600 some people landed on the island that Raleigh named 'Virginia'. This company hoped to occupy land for England, find precious metals and establish a base from which to raid Spanish ships. After soldiers helped build an earthen fort, Captain Grenville departed for England, leaving Ralph Lane in command of 107 soldiers and colonists. The expedition's highlights included exploration of the region's lands and waters and the work of artist John White and scientist-ethnographer Thomas Hariot. Their documentation of the Algonquians provided Europe its first view of this native culture. Otherwise, things did not go well. The colonists increasingly depended on the Indians for food. Indians began to die from European diseases brought over by the colonists. Lane became increasingly suspicious of the Indians and killed Chief Wingina. When Grenville did not return with supplies by the expected time and Sir Francis Drake's raiding fleet stopped by, the colonists accepted Drake's offer to take them home. When Grenville arrived later to find the colonists gone, he left 15 men to maintain England's tenuous foothold in America.


A couple pics I took of the Earthen Fort. Nothing really there to look at. Don't know what I expected from so very long ago. They hold 'events' here for the visitor center, like talks and kids 'fun stuff' like making postcards etc. The kids did participate in postcard making, but it was so hot it was held inside.


1587: Cittie of Ralegh - The goal of this third voyage was a true colony with women and children among the settlers. John White the artist that had accompanied the previous voyage to document in drawing was appointed the Governor. The colony was planned to be on the Chesapeake Bay, but after the 117 colonists stopped at Roanoke Island on a futile search for the 15 men left behind, the pilot of the ship refused to take them any farther. So they repaired the fort and dwellings left by the 1585 colonist. John Whites pregnant daughter and son-in-law were among these current colonist. Shortly after arrival a daughter was born to them and they named her Virginia Dare. She became famous as the first English child born in the New World. Troubles quickly mounted. Remembering their earlier treatment, some Indians were hostile and killed a colonist while he was crabbing. The colonists then attacked a nearby Indian village, killing a villager before realizing it was a friendly group. With the situation deteriorating and food low, White returned to England for relief. The colonists promised that if they left Roanoke Island while he was away, they would carve their destination in a tree. Thwarted by war, White didn't return until 1590. The settlement was deserted with only letters CROATOAN carved into a post. When White tried to reach Croatoan Island (what is now Hatteras Island) a hurricane forced the ships' return to England. The fate of the colonists remains a mystery and it is now referred to as The Lost Colony. 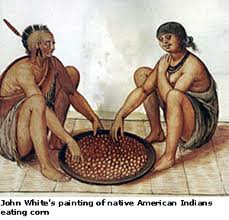 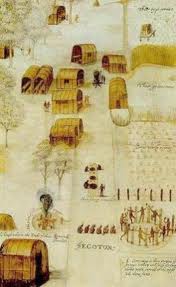 There is a theater at the historic site, called The Waterside Theater and it puts on a play every summer about the Lost Colony. Famous actors and actresses have acted in this play through the years. At the visitor's center there is a book with a list of participants thru the years. Andy Griffith started out acting in this play and stayed active in the Lost Colony Theater all his life. He lived on Roanoke Island.


During the Civil War Union forces opened their 1862 campaign to blockade southern ports by taking Roanoke Island, flanked by important waterways. Word spread among runaway slaves that on 'Roanoke Island, you will find safe haven'. Hundreds of refugees poured in and the army established a Freedmen's Colony. Acre lots were laid out and missionaries recruited as teachers. By 1865 almost 3,500 freedmen lived in 560 log dwellings they had built, along with a hospital, church, schools and a sawmill. These slaves brought vital information to the troops and aided the Union Army. The colony was decommissioned in 1867.

Radio pioneer Reginald Fessenden came to Roanoke island in 1901 to work on a wireless system for transmitting weather information. He erected 50 ft. radio towers on Cape Hatteras and the north end of Roanoke island. At the same time the Wright brothers were testing their gliders, seven miles away, Fessenden lived in Manteo for a year and a half, traveling each morning to Weir Point to refine his radio signals. In April 1902, he wrote, 'The new receiver is a wonder!' He had succeeded in sending a receiving quality voice radio transmissions - a crucial step in regulating electromagnetic signals called amplitude modulation (AM) which enabled clear voice transmissions over the airwaves.

The Elizabethan Gardens are also here at the historic site. They are 10 acres of formal arrangements of statuary, quiet paths and flora. Stephanie and I wanted to go but it was so very hot and it would have been miserable for the kids so we decided not to go.

Footnote on Sir Walter Raleigh... he was executed in 1618 by beheading. Check out the story here and read the letter he left his wife before his execution here.
Posted by Peggy Arthurs at 5:30 AM

Email ThisBlogThis!Share to TwitterShare to FacebookShare to Pinterest
Labels: N.C., Travels with The Traveller