Kerrie at Mysteries in Paradise hosts the Crime Fiction Alphabet each week. This week is the letter L and I read Linda Greenlaw's book... 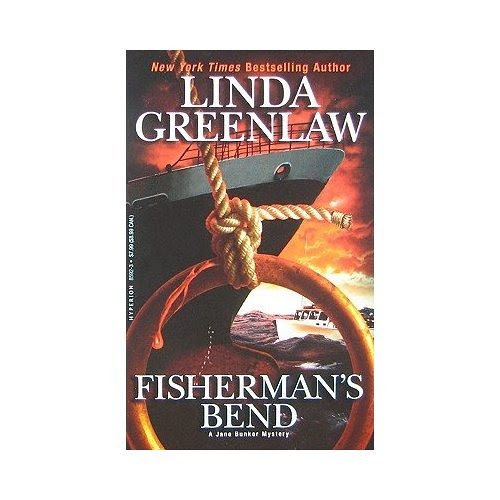 Jane is a former Miami homicide detective who gave up her big city life for the quiet of Green Haven, a small Maine fishing town. How much quiet she gets is up for debate! She works as an investigator for a marine insurance company and moonlights as an assistant deputy for the Knox County Sheriff's Dept. Jane grew up hanging around the commercial fishing docks in Miami so she knows her way around a lobster boat.

Jane is called in on a vandalism case for the insurance company. Quest is a research vessel hired by North Atlantic Shell Farms, a large aquaculture outfit. They want to plant an oyster bed in Cobscook Bay. Of course there is opposition by the residents and a local Passamaquoddy tribe. Someone has destroyed some equipment on board the Quest.

Cal Dunham is a retired offshore fisherman in his 70's. A rugged man of few words and an honest face befriends Jane in the first book and becomes her friend and helper, transporting her back and forth to boats or other harbors on various jobs.

On the way back from inspecting the Quest, they come upon a lobster boat, the Eva B circling lazily in the water. Upon inspection they find the boat is empty. What happened to the captain, Parker Alley? Did he fall overboard, jump to his death or is foul play afoot? His brother came along side the Eva B as they were waiting for the Coast Guard and he didn't seem to be too concerned and assumed his brother was already dead. Very strange...

Parker's son just died of a heroin overdose. Hasn't even been buried yet. Jane promises the local waitress at the Cafe she will get to the bottom of the overdose and find the supplier.

Does Parker's disappearance have anything to do with the Quest's vandalism , the proposed oyster beds, or is Jason's overdose tied up in it somehow?
What does the harbor pilot Willard Kelley know? He boards the big tankers and cruise ships and steers them in and out of the harbor. Parker escorted Willard to and from the ships when needed. The plot thickens!

This was a good mystery with lots of funny characters, laughs and a decent mystery to figure out. I loved the setting and the boat and lobstering references and info. I'm looking forward to visiting Jane Bunker again!

Before she started writing, Linda Greenlaw was a captain of a sword boat, which earned her a prominent role in Sebastian Junger's 'The Perfect Storm' and a role in the film of the same name. With 9 books, including cookbooks, under her belt she now captains a lobster boat and resides on Isle au Haut, Maine. (Pronounced isle a hoe)

I read The Lobster Chronicles and really enjoyed it too!


Peggy Ann
Posted by Peggy Arthurs at 7:00 AM