'Damned if they ain't flew!'

That was what a witness to the first human flight is quoted as saying when the Wright brothers achieved their lifelong goal.

We stopped in at the Wright Brothers while we were in the Outer Banks. Picked a bad time as the two large exhibit bldgs. were closed for renovation, but the presentation and talk was really good. We did get to see models of the two aircraft and a small exhibit was inside the visitor center. Outside we saw the markers where the glider landed each time and a large memorial stone to the brothers.There was a nice model of the maiden flight with all the men standing where they would have been etc. and a glider the kids could crawl around on and see what it must have felt like to ride it. There was also two sheds to look inside, the small shed they lived in (really just a sleeping and eating place and a work room) and the shed they did their building in. It only cost $4 for adults, under 16 are free. If you are in the Outer Banks it is well worth the $4! Was hard to get any good pics but here are the few I took. 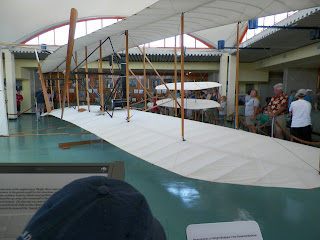 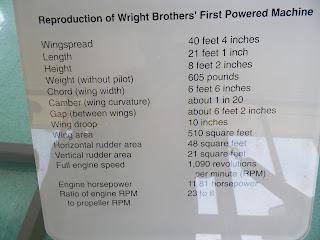 Cute story about the photo, the young man asked to take the shot had never taken a photo in his life. After the flight they asked him if he got it and he said 'Did you see that! They were flying' and in his excitement he couldn't remember if he remembered to click the camera. They had to wait until the film was developed to see if he got the shot or not. 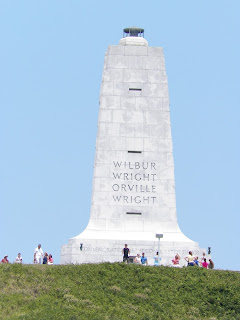 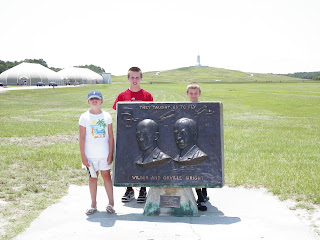 Orville and Wilbur Wright, the only two in their family without a college education, achieved what so many others had tried and failed. In 1903 The first human flight was taken. They built an improved flyer and refined their flying skills over a field in Ohio, making 105 flights in 1904. In the 1905 flyer - the first practical airplane circling flights of up to 38 minutes became routine. The Wrights offered the Flyer to the US Army, but they refused to meet with the brothers. Unwilling to show their control system without a contract in hand, the brothers did not fly for another three years.

Despite the break in progress, the gap between the Wrights and European aviators remained substantial. After 1903 the French built flyers based on the Wright's 1902 glider, but by 1906 none had remained aloft for more than a few seconds of ragged flight. Not until 1907 did a European plane stay in the air as long as the Wrights had in 1903. By 1908 a French pilot had flown for over 20 minutes. That year the Wrights did sign a contract with the US Army and France and showed the world what they could do. No one questioned that the Wrights had truly mastered flight after that. By 1910 The rest of the world had caught up.

Get more info at Wright Brothers National Memorial
Posted by Peggy Arthurs at 5:30 AM

Email ThisBlogThis!Share to TwitterShare to FacebookShare to Pinterest
Labels: N.C., Travels with The Traveller