Opened: 1870
Height: 187 feet (57 m)
Diameter: 37 feet (11 m)
Width: 37 feet (11 m)
Steps: 257
Built with 1,250,000 bricks baked in kilns along the James River in Virginia and brought down by scow and then hauled by oxen to the site in Buxton, N.C. It weighed 6,250 tons, built with no pilings underneath just a foundations made of heart pine. It is the tallest brick lighthouse in the United States and measures 210 feet from the bottom of the foundation to the top of the pinnacle of the tower.
The beacon from the light can be seen some 20-miles out to sea and has warned sailors for more than 100 years of the treacherous Diamond Shoals, the shallow sandbars which extend some 14 miles out into the ocean off Cape Hatteras. These waters are very dangerous because of the cold-water Labrador Current from the north and the warm Gulf Stream from the south, converge just offshore from the cape. Its called the Graveyard of the Atlantic. Click on either link in this paragraph to read about it! There are thousands of shipwrecks off this coastline.
The original lighthouse here was built in 1803, made of sandstone, was 90 ft. tall and burned whale oil.
This light was not tall enough or bright enough to effectively reach the mariners. So in 1863 they added 60 ft. and painted red on top ans white at the base. The tower was retrofitted at this time with a first order Fresnel lens.
By the 1860's it needed extensive repairs and by 1868 the construction on the new light was started. The new lighthouse was lit on December 1, 1870. The 1803 lighthouse was demolished in February of 1871. The Cape Hatteras Lighthouse received the famous black and white stripe pattern in 1873.
Due to beach erosion over the years the light was in danger of falling into the sea and something had to be done to save it. Waves were lapping at its foundations during storms. In 1999 it was moved to its present location.  The lighthouse was moved 2,900 feet in 23 days and now lies 1,500 feet from the seashore, its original distance from the sea. The Double Keepers’ Quarters, the Principal Keeper’s Quarters, the dwelling cisterns, and the oil house were all relocated with the lighthouse.

It was quite a feat! And we were lucky enough to be there on vacation when they were doing this back in '99! It was really cool. Of course this was pre-digital camera for us and I did a quick look for some pics we took then but can't find any. Someday I will organize the pictures! If you have 50 minutes here is a documentary about the move!

Here are a few pics from this trip at the lighthouse! 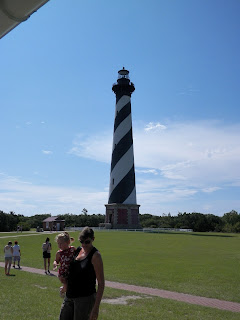 There are three other lights on the northern Outer Banks... 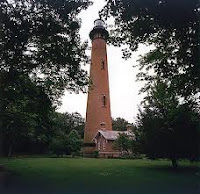 Currituck Light (We climbed this in 1999)
This is the northern most one and it is beautiful! The lighthouse keepers house is restored too. 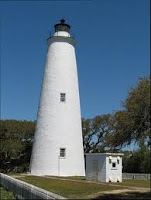 This is Ocracoke Light and it is on Ocracoke Island and you have to take a ferry there. We climbed this oe in 1999 too.

Here are several books set in the Outer Banks of North Carolina...