We just got home from a week at the beach in Hilton Head Island S.C. and it is full of consignment shops and thrift stores! My favorite places to roam around next to a used book store! So while the Traveller golfed, I roamed! Thrift shops are the equivalent to your charity shops in Scotland, Katrina. The 'merchandise' is donated and the proceeds go to the charity that is running the shop. Consignment shops are a little different. In those you would bring your items and sell them thru the shop receiving a percentage of the sale for yourself and a percentage going to the shop owner. Prices are usually a little bit higher in the consignment shops. But in a town like Hilton Head you would find brand name items, that sell at top stores, for a good discount. Lots of 'well-to-do' people live on Hilton Head. But consignment shops don't usually have books and that is what I'm always on the prowl for!

I only managed to make it to the Animal League Thrift, the Cancer Society Thrift, Good Will and the very large Island Thrift.Roaming and prowling all thru all that wonder stuff takes lots of time you know! The Island Thrift was the biggest, well organized, small book section. Cancer Society was very cramped, small rooms and lots of stuff, small book section and half off all clothes! The Good Will was small, dirty and didn't have anything worth carrying home. Although we have been in some very clean organized large ones in our many travels. (The Traveller is good to pull over whenever we see one and let me loose). But the Animal League was the nicest one this trip. Small but very clean with really nice items and very organized and the largest selection of books. (I found '44 Scotland Street' by Alexander McCall Smith, Katrina!) 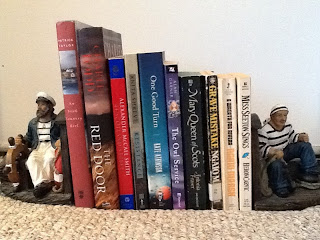 Book wise I got:
An Irish Country Girl by Patrick Taylor     (I loved An Irish Country Doctor by him!)
The Red Door by Charles Todd
Resistance by Anita Shreve
One Good Turn by Kate Atkinson
Mary Queen of Scots by Antonia Fraser     (She has always intrigued me!)
Miss Seeton Sings by Heron Carvic
A Wreath for Rivera and Grave Mistake by Ngaio Marsh
and of course 44 Scotland Street by Alexander McCall Smith  (I have never come across any of that series by him just the mysteries set in Africa)
I did not get the Book Ends on this trip I had those from a trip to Nova Scotia 8 yrs ago.
No real vintage books this time but I was tickled with my finds. 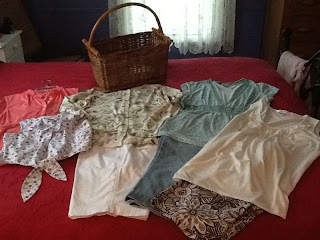 I also got some good bargains in the clothing department. A cute Lands End top, 2 pair of Anne Taylor Shorts for just $2 ea. (the white and the brown print), a pair of Anne Taylor denim capri's for $2, a couple other tops, the little floral tie top is for Baby Girl, and a gorgeous Izod sweater for $2, just like new and such pretty colors (doesn't show up good in the pic - white with brown, palest pink and lime green flowers) and the pretty basket to put my magazines in. Also got couple pair of shorts for The Best Boy and a jigsaw puzzle.

While I was shopping Traveller golfed on some very nice, tough courses. Golden Bear was designed by Jack Nicholas, The Crescent Pointe was designed by Arnold Palmer and he dodged alligators on Rose Hill Golf Course.

Speaking of Gators... they are everywhere on Hilton Head! They routinely pick them up wondering around in parking lots, you see them swimming in every little pond. Signs are everywhere to stay away from them and not feed them.
While we were at a local park walking we saw the critter management fellows at the side of the pond and they had a large gator taped up by their truck. They had just picked him up at Long Pond. It had eaten someones small dog. They were at Jarvis Creek Park to catch a large one that had come up and grabbed a soccer ball from a kid. They did catch it that night and it was 13 ft. and 1,000 lbs. It made the paper and the news the next night see here. 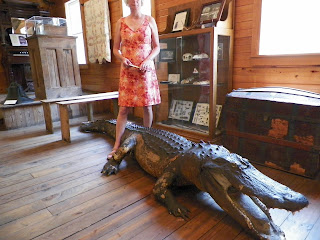 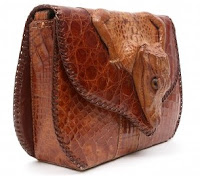 Here I am with an old stuffed gator at a museum...


A friend said to me upon hearing about the gator at the park that she had the urge to stand on the bank and shout 'Handbag'! Well, when we first moved to Florida when I was small I had an alligator handbag! It looked very much like this one.. shame I didn't keep it, this one sold for $450!!

In addition to beaching... 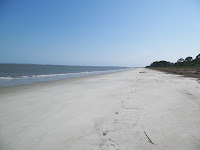 we also took a boat ride over to Dafuskie Island. An island rich in history. There were 11 plantations before the civil war. During the war the residents left and the soldiers took over the island. After the war freed slaves returned and made it their home. They were referred to as Gullah. The island now has a large gated community on one end where people like Ron Howard, John Cougar Mellencamp and Meg Ryan own homes. We got a golf cart and rode around looking at history markers and old cemeteries and walked on the beach.


This is Mary Fields School. It was built in 1930 for the island's black children. The school was integrated after the last white child graduated from the White School House in 1962. The school was immortalized by Pat Conroy in his book, 'The Water is Wide.' He taught school here in 1969 but was fired at the end of his first year because of his unconventional teaching methods and refusal to use corporal punishment. The children, ages 10-13, had no contact with the mainland or it's people and were illiterate and innumerate. He was frustrated with the school administration for their refusal to address the problem and they went head to head.  He went on to write 'Prince of Tides', 'The Great Santini' and 'Beach Music'. The school was closed in 1997 and is now used for church and civic activities. 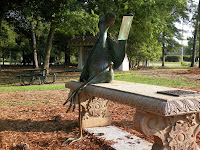 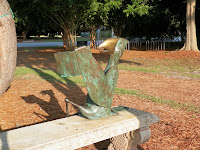 On another walk in a local park we found this cute statue of a bird reading a book. 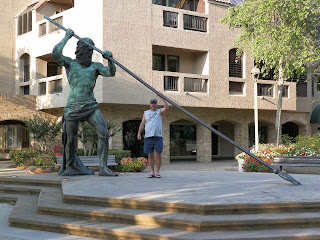 And this statue of King Neptune at Shelter Cove Marina. You can see how large it is with the 6 ft. Traveller in there for comparison! Isn't it gorgeous! 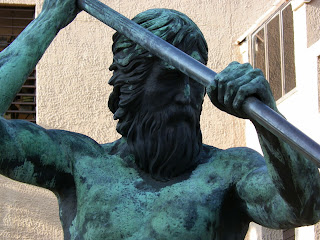 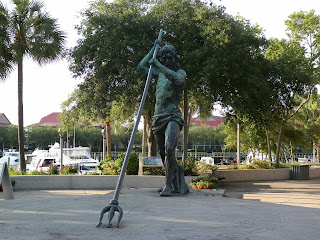 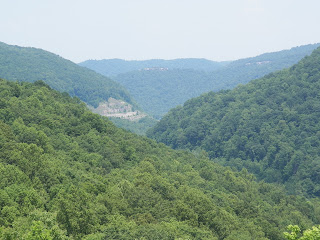 The trip was great and a good time was had by all, but after a week on flat ground it sure brought a smile when we hit the hills of West Virginia and I knew I was almost home!
Posted by Peggy Arthurs at 8:10 PM