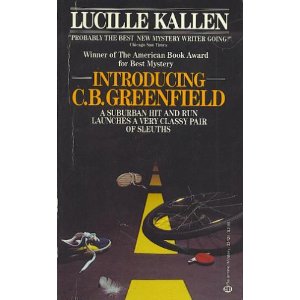 C.B. Greenfield is owner and editor of a chic Westchester weekly newspaper. Maggie Rome is Greenfield's star reporter. In a small town no news is...
Well, no news.
But something happens that makes front page headlines and turns editor and reporter into Sherlock Holmes and my dear Watson.

Lucille Kallen was the lone woman on the writing team for Sid Caesar's 'Your Show of Shows'  (1950-1954) and only turned to fiction when the show was canceled. As far as I can tell she only wrote the 5 mysteries in the C.B. Greenfield series. She passed away from cancer in 1999 at the age of 76.

The story is set in fictional Sloan's Ford NY. The Sloan's Ford Reporter is run by C.B. (Charlie) Greenfield, a retired NBC staff writer, from the downstairs floor of his old home. I enjoyed the opening introduction Ms. Kallen wrote describing Charlie -

'He swiveled slowly around, to an accompaniment of associated squeals and groans, and regarded me from behind his large horn-rimmed glasses. He was a long, slope-shouldered, mournful-looking man, with wispy gray hair and the face of a dignified basset hound. His movements were supremely deliberate and his pronouncements infinitely calculated; he moved through life like a man who found himself crossing a gorge on a high wire without a net. His expression suggested he was resigned to this unaccountable infamy of fate, but, as I’ve said, the expression of benign and gentle melancholy was totally deceptive. He had been known to cut an ego to ribbons while giving the perfect impersonation of a kindly old country doctor handing out lollipops.'

Maggie Rome his only reporter, married with 2 sons in college and a dog named George, Helen Deutsch, a chunky middle-aged lady, and Calli Dohanis, tall and skinny with black hair and a very flamboyant dresser, are among his small staff. Peter Kittell is the young boy who delivers papers on his bicycle.

One night on her way home Maggie comes across the crumpled body of Peter and his mangled new bike laying in the middle of the road. A hit and run. Charlie takes it very personally and is determined to get to the bottom of it. In the process there are other little Sloan Ford secrets that come to light and another mystery to solve.

I loved the relationship between Charlie and Maggie and the wonderful tete-a-tete between them. I also enjoyed the odd assortment of characters that become part of the story as they search for the hit and run driver. Great plot, lots of humor, likeable characters and a great ending. Leaves you wanting to return to Sloan's Ford. Can't wait to get to the other 3 I have in the series.