This weeks letter is E

I am writing about Eilis Dillon a prolific Irish writer. I adore her vintage detective novels set in Ireland!
Eilis (aye-lis) was born 1920 in Galway Ireland into a family deeply involved in the events of the Irish War of Independence. Her great uncle Joseph Mary Plunkett was one of the seven signatories of the Proclamation of Independence and was executed by firing squad following the Rebellion of Easter Week 1916. Her father and mother were both in jail at various times for political reasons. For more info on Eilis Dillon see her website here.
Eilis married Cormac Ó Cuilleanáin, seventeen years her senior and Professor of Irish at University College Cork. They had 3 children. Eilis ran a student hostel at the university. In the 1960's Cormac's healthy deteriorated and they moved to Rome. He died in 1970. Eilis' huge historical novel about the road to Irish independence in the 19th and early 20th centuries, Across the Bitter Sea, was published in 1973 and it became an instant best seller.

Eilis remarried in in 1974 to Vivian Mercier, Professor of English in the University of Colorado at Boulder. Eventually moving to California where they spent winters and travelling to Ireland each spring and summer. Vivian died in 1989 followed in 1990 by the death of her daughter Máire, who was a violinist with the London Philharmonic Orchestra. Eilis died in 1994 at the age of 74

Eilis published poems, stories, many children's books, and novels and three wonderful mysteries!  Two of these Irish mystery novels were translated into other languages; all were well received by the critics. They are of historic interest, being among the earlier novels of their kind to be set in Ireland, and they still make highly enjoyable reading as vintage crime fiction. Rue Morgue Press has reissued them in new trade paperback editions. I only wish she had written more detective stories!
click on each title for a synopsis...

I have all three books, but so far have only read Death at Crane's Court. I loved it. Click on the book cover below to read my review. 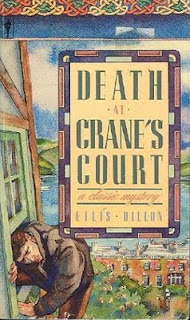 This post is linked to Crime Fiction Alphabet @ Mysteries in Paradise. Hop over and see what others are reading in the genre!
Posted by Peggy Arthurs at 10:32 AM