Travels with The Traveller

We took a trip last week to Canaan Valley, West Virginia. The local pronunciation of "Canaan" is /kəˈneɪn/, rather than the conventional /ˈkeɪnən/ for the Biblical region from which the area takes its name. It is the highest valley outside of the Rockies, elevation something like 3200 Ft. It truly is a gorgeous place. Plenty of deer, friendly deer, not afraid of you at all, especially in the Canaan Valley State Park. I was amazed at the amount of flies that terrorize these beautiful animals! You don't see them until you get close up.

There is not a lot of shops or restaurants in this area it is still relatively untouched by tourism. It is for hikers, skiers and fishermen basically. Great campgrounds in the state parks. Blackwater State Park near by is named for the falls of the Blackwater River whose amber-colored waters plunge five stories then twist and tumble through an eight-mile long gorge.
The "black" water is a result of tannic acid from fallen hemlock and red spruce needles. The falls are one of the most photographed sites in West Virginia. 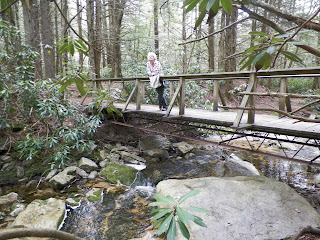 We hiked a little in Blackwater Falls St. Pk. what a gorgeous place!
So much mountain laurel but it wasn't in bloom. I think the cold snap they had a couple weeks ago (in the 20's) pretty much did in the flowers this year. 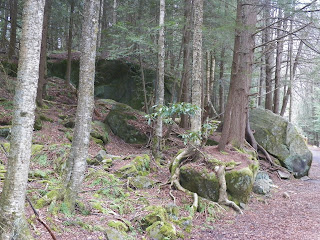 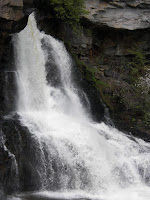 The Traveller got to do quite a bit of trout fishing, they stock the streams once a week. Everyday they are somewhere putting in fresh trout! He caught a total of 8 trout and 2 bass. Couple days he went and the fish were swimming all around his hook but none would bite. The water levels are very low there this year as they had very low snowfall this last winter.

He cleaned them and froze them and we brought them home and had trout the other night and it was yummy!

We took a ride over to Seneca Rocks, a mecca for rock climbers. We were there last year but the trail to the lookout was closed for repairs so Traveller was thrilled to get to go up this time. Crazy people actually scale the sides of these rocks! 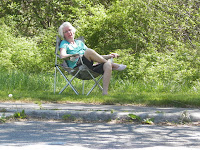 You can see what I did while he hiked way up to the lookout! I was reading 'The Black House'. The overlook is way up in the left corner of the pic. Took him about 40 mins. each way. He said you could see for ever from the top! 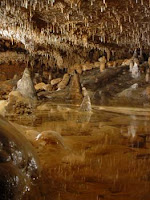 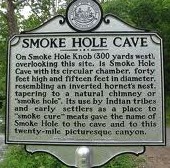 Another day we took in some caverns, Smoke Hole Caverns. I didn't even take the camera in but here is a pic from the internet.
We stopped for pizza at The Front Porch and then roamed around the general store next door and I found a First American Edition 1984 hardback copy of Affairs at Thrush Green by Miss Read! It's in mint condition, only $3. Made my day of course! I've been on the lookout for Miss Read. And Traveller got a T-shirt at the caverns 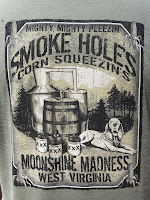 Our last day we went for a walk in the woods at Canaan Valley State Park and then Traveller golfed on their beautiful golf course. I got to drive the cart as I am not a golfer. I love driving those carts, the kid in me comes out! What a spectacularly beautiful course! Mountains all around and the sweet valley. I enjoyed the views while he chased a little ball around. Just can't understand the thrill of golf. 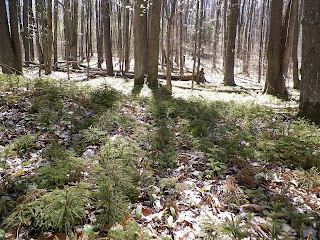 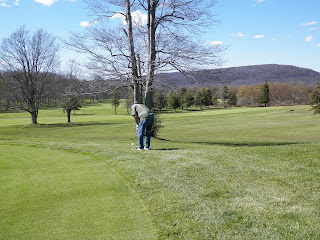 I also got 'The Haunted Hotel' by Wilkie Collins and 'The Holocaust House' by Norbert Davis read on this trip!

The Traveller bought me a lovely small pottery bowl with the imprint of oak leaves and acorns in it. It is hand made and I will do a small post on it and the artist later.

I also learned about ramps on this trip. Never heard of them before and everywhere we went we ran across the word ramps. I thought they might be some kind of seafood as they had them advertised at the local bait shop but they are a wild onion native to North America. Sometimes called wild leeks. Here is a great article about them and here's a picture of them...

Fried Eggs with Bacon and Ramps
yield: serves 2 to 4, active time 25 minutes, total time 25 minutes
Place bacon in a 10-inch nonstick skillet and add water. Bring to a simmer over high heat and cook, stirring occasionally, until water has evaporated and bacon is well-rendered and crisp, about 15 minutes. Transfer bacon to a small bowl, but leave rendered fat in skillet

Add butter to bacon fat and heat over high heat until foaming has subsided and butter begins to brown. Add ramps and cook, stirring and tossing occasionally until well browned. Season to taste with salt and papper. Transfer ramps to bowl with bacon.

Crack eggs directly into skillet and fry over medium-high heat until whites are set on top and brown and crisp on the bottom, and yolk is still runny, about 2 minutes. Transfer eggs to a plate, pour any remaining bacon fat and butter from the skillet over them, season to taste with salt, pepper, and chili flakes, and serve with bacon and ramps.

Check out a couple other recipes for ramps here.

Hope you enjoyed the trip!
Posted by Peggy Arthurs at 10:54 AM