Anna Katharine Green was regarded as the mother of American detective stories and distinguished herself by writing well plotted, legally accurate stories. She was born in Brooklyn N.Y. November 11, 1846 to Catharine Ann Whitney and James Wilson Green. Her father was a lawyer and no doubt had an influence on her writing. She is most famous for her first novel, The Leavenworth Case, published in 1878, praised by Wilkie Collins and regarded as the first American Bestseller. She is credited with shaping detective fiction into its classic form, and developing the series detective. Her main character was detective Ebenezer Gryce of the New York Metropolitan Police Force, but in three novels he is assisted by the nosy society spinster Amelia Butterworth, the prototype for Miss Marple, Miss Silver and other creations. She also invented the 'girl detective': in the character of Violet Strange, a debutante with a secret life as a sleuth.

Anna originally wrote poetry, romantic verse, and corresponded with Ralph Waldo Emerson. But when her poetry failed to gain recognition she turned to writing detective novels. Lucky for us!

In 1884 Anna married aspiring actor and stove designer, Charles Rohlfs. When his career in acting didn't take off he became an internationally known furniture designer. She and Charles had 3 children, Rosamunde, Roland and Sterling. They settled in Buffalo NY in the late 1880's and Anna died at home at the age of 88  on April 11, 1935.

She published around 40 books in her successful career. Many of them are available for free in ebook format. See my previous post I'm on a Binge for links to places you can obtain copies! Here are a list of some of them...
I found this site with all things Anna Katharine Green that might interest you, and Mystery Scene Mag has a really good article here. Mystery Scene is a great site for mystery lovers!

Here is a fun photo from the past! A billboard as you enter the city of Buffalo NY in honor of Anna. 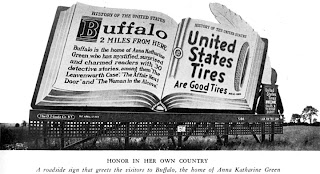 I just finished 'The House in the Mist' (It also includes another book 'The Ruby and the Caldron'). My first Anna Green book. I would call it a short story. It was only 67 pages. A stranger traveling on cold and misty night comes upon a light and discovers a house with an open door (we are never given his name). He ventures over hoping for an Inn or Tavern to come in out of the night and get a bite to eat. The house seems empty, but as he approaches the door a man comes hurrying out and rushes past him. The stranger calls to him if there is a meal and shelter available and the man calls back "Just go in, the meal is at 9" . He enters the house and soon after people begin coming in. He discovers he is at a gathering for a will to be read. The lawyer says that a stipulation is that they must not have anything untoward in their lives, a sin, or evil deed. If they do they are exempt and will not inherit and can leave now. In this rough, greedy bunch the one kind, soft looking woman in the group stands and says she cannot be included then and opens her coat and shows an infant in her arms. She is unmarried. She leaves. The stranger is finally called upon to identify himself and then asked to remove himself from the room. He goes up a set of dark stairs and discovers he can hear the proceedings clearly thru the door so stays to listen in. I thought oh we know how this ends, the honest girl who left will be the one to get the inheritance because she was honest. This is a pretty predictable tale here. Boy was I wrong! I never would have guessed the ending in a million years! And that's all I'm gonna say :=) The whole tale is told by the stranger as a bystander.

Forgotten Books Friday is a weekly meme hosted by Patty Abbott over at Pattinase. Check over there and see what other forgotten books and authors other people are reading!
Posted by Peggy Arthurs at 5:00 AM