The Black House by Constance and Gwenyth Little
From the back cover:
'Henry's aunt painted the outside of her house black.
She isn't gloomy. She still enjoys an occasional glass of sherry.
Too bad she's been dead for a year. 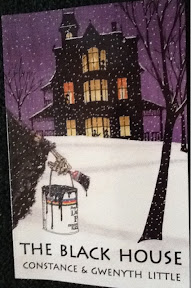 When Henry Debbon accepted (most reluctantly) the job of being body guard to his boss's beautiful red headed daughter, he never expected he'd end up being shot at (twice), or have his clothes confiscated at a hospital. He also wasn't prepared for hosting most of the people from his office at the house (painted black) in upstate New York he recently inherited from his very eccentric aunt. And although he thoughtfully poured out an extra glass of sherry in his aunt's memory, he was just as surprised as the rest of his "guests" when she apparently drank it.
A little ghostly imbibing was the least of Henry's worries. Those unwelcome guests also included a potential murderer-an escaped convict who seemingly will stop at nothing to avenge himself on Henry's boss for refusing to represent him. Worse yet, a major snow storm has isolated them all from help.
First published in 1950, it's vintage Little mayhem, although told for the first time from a entirely male point of view.'
This was my first vintage Little sister's mystery. Mayhem is a good word for it! It reminded me of those old screwball movies, think Arsenic and Old Lace!
It was lots of fun and a very good mystery to boot.
The old black house Henry inherited was a fun place to set the mystery. It's remote, old, large and has been remodeled into a duplex so that means lots of fun, quirky spaces! Diana commented "This house is really very peculiar. The stairs are so narrow and the hall downstairs too. Up here the hall is much wider." Henry, plodding through the deep snow, looked up at the house and muttered, "Hideous old wreck!". Great fun! I read that the Little sisters always have a great old house at the center of their mysteries. I'm looking forward to more madcap mystery from this duo!
Constance (1899-1980) and Gwenyth (1903-1985) wrote 21 mysteries all from their beds! Gwenyth complained that "chairs give one backaches". The sisters were Australian born but lived in East Orange, New Jersey. All their books but The first one (The Grey Mist Mystery) had black in the title. Constance provided the detailed plot outlines with Gwenyth doing the final drafts. The murders were always off stage and tempered by comic scenes in which bodies and other objects were always disappearing and reappearing. The action took place in large old mansions, boarding houses, hospitals, hotels or on trains, ocean liners or anywhere they could gather large groups of eccentric characters. Their heroine often fell under suspicion herself and turned detective to keep the police from slapping cuffs on her. Whether she was a working woman or a spoiled rich brat, she always spoke her mind, kept her rather sarcastic humor, and got her man, both murderer and husband. The plots were often preposterous, a fact often recognized by both the Littles and their characters, all of whom seem to be winking at the reader. They were definitely one of a kind mystery writers!
The Littles published their last 2 novels in 1953 (The Black Curl and The Black Iris). The girls loved to travel and made three trips around the world at a time when that would have been a major undertaking.
Thankfully, Rue Morgue has reprinted the first 16 Little books. Try to find one, you'll be glad you did!

This post is linked to the Alphabet in Crime Fiction 2012. A community meme hosted by Kerrie @ Mysteries in Paradise
and highlights crime fiction by title or author. This week is the letter B.  Here are Kerrie's rules...

By Friday of each week you have to write a blog post about crime fiction related to the letter of the week.