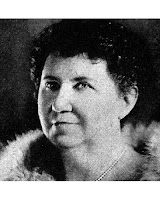 She had been married to Hadwin Houghton, the heir of the Houghton-Mifflin publishing empire founded by Bernard Houghton. Wells also had an impressive collection of volumes of poetry by others. She bequeathed her collection of Walt Whitman poetry, said to be one of the most important of its kind for its completeness and rarity, to the Library of Congress (New York Times, Apr. 16, 1942).
After finishing school she worked as a librarian for the Rahway Library Association. Her first book, At the Sign of the Sphinx (1896), was a collection of charades. Her next publications were The Jingle Book and The Story of Betty (1899), followed by a book of verse entitled Idle Idyls (1900). After 1900, Wells wrote numerous novels and collections of poetry.

Carolyn Wells wrote a total of more than 170 books. During the first ten years of her career, she concentrated on poetry, humor, and children's books. According to her autobiography, The Rest of My Life (1937), around 1910 she heard one of Anna Katherine Green's mystery novels being read aloud and was immediately captivated by the unravelling of the puzzle. From that point onward, she devoted herself to the mystery genre. Among the most famous of her mystery novels were the Fleming Stone Detective Stories which number 61 titles.

I just downloaded 7 of her vintage mysteries from Project Gutenberg for my ereader and thought I would share this with all of you! If you love vintage mysteries and use an ereader, you have to runner over there and pick these up! Their free! They also have a lot of the Patty series and Marjorie books available too if you like vintage children's books. I can't wait to get started on one!

Posted by Peggy Arthurs at 9:55 AM