'At Rushing Farm, the Manning household with Aunt Flora at its head lives in harmony. With the appearance of George Manning, however, peace is at an end. George is a successful actor, spoilt and selfish. He sees nothing at Rushing but discomfort and boredom, and his relations hope that he will carry out his repeated threat of departing by the next train. But with the arrival of Brian Lorimer and the enchanting Angela Reynolds, George finds something at Rushing which proves a greater attraction than his comfortable existence in London.' 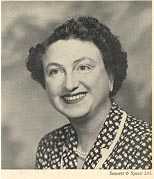 Elizabeth Cadell (A.K.A. Harriet Ainsworth) was born in 1903 in Calcutta, India. During the Great War she studied music in London, but refused a musical career and returned to India where she married and had two children. After she was widowed ten years later, she returned to England.

Elizabeth wrote her first book 'My Dear Aunt Flora' during the Second World War in 1946, thereafter producing another 51 light-hearted, humourous and romantic books which won her a faithful readership in England and America. She moved to Portugal in 1960 and subsequently set many of her books in that country. She died in 1989, aged eighty-five.

This was my first E. Cadell book and I thoroughly enjoyed it. Written in 1946, it is a pastoral, feel good book full of light humor. Jonny (Jonquil) and Phyl, her sister-in-law are widowed young. Jonny has 2 children. They decide to move out to a large farm house in the middle of nowhere left to Jonny by her late husband. They invite Aunt Flora to come live with them. Flora raised Phyl, Hugh (Jonny's husband) and George. I loved Aunt Flora and Jonny. I would love to trade lives with Jonny! I think it might even be worth having to live with an outside potty! There is a great gang of kids that are always in and out with much mischief and of course dogs! Rex, the Great Dane being the best! Phyl on the other hand would be a thorn in my side. She never lifts a finger to do anything, always lounging somewhere or sleeping till noon. But because she is beautiful and kindhearted everyone excuses her. Brother George comes for a 'rest' and thoroughly upsets their peaceful existence. He is demanding and grumpy. Throw in beautiful Angela Reynolds who comes for the summer and Brian Lorimer, a longtime 'pursuer of Phyl's and you end up with a wonderful hilarious romp. Brian is such a wonderful addition to the little group with his humor and lighthearted take on everything. The book ends with a wedding, who's I'm not telling you'll have to find the book!

Thanks to Nan over at Letters from a Hill Farm for recommending it!

Ms. Cadell's books written in primarily in the '50's - '80's are rather difficult to find. Used online they run rather steep in price, into the hundreds! Not really sure why. I found this one through my state's inter-library loan system.  Alibris seems to have the most reasonable prices. 'Death Among Friends' is the one I want to read but it is listed starting at $387!! Must be very hard to find. Here are a couple of links you might like...

'Death and Miss Dane' a never before published book by her and a biography by her daughter.

elizabethcadell.com  Be sure and check out the page 'dust jackets' for a great view of all the dust jacket from her books!

If you've read a Cadell novel leave a comment and tell me which one and what you thought of it!
Posted by Peggy Arthurs at 7:52 AM