'The Case of the Constant Suicides' by John Dickson Carr 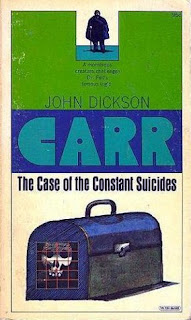 Isn't this an interesting cover? I like it for some reason:) This little pet carrier is the key to the locked room puzzle in this novel. And if you can figure it out you are way smarter than I am! Never in a million years would I have come up with the solution.

I did enjoy this book. It was set in Scotland, had characters that I really liked, was humorous and a great mystery!  And for you romantics, there was a love story too!

Angus Campbell has fallen, jumped or been pushed out of a window in the tower room he sleeps in. The door was locked from inside, no one else was in the room. He had just taken out another life insurance policy that would be null and void if he committed suicide. So what happened and what does the pet carrier found under the bed have to do with it? Is the tower haunted?!

Family members are called to the Castle of Shira as they try to determine if it was accidental, suicide or murder. Colin Campbell, Angus' brother is sure it is murder and has called his friend Dr. Gideon Fell to join them and see if he can figure out the riddle of the 'locked room'. Colin decides to stay the night in the tower room himself and see what might happen. Oh-Oh will we have another 'accident'. Then there is Alec Forbes the neighbor with a history of angst against the Campbells. He did stop by the night Angus died. Where is he now?
And there is the missing diary that Angus wrote in every night...

You'll also met Alan Campbell and Kathryn Campbell two history professors who have been having a running feud via a newspaper article on a figure in history. Turns out they are distant cousins and called to Shira, where they meet face to face for the first time. and there's Elspat, the long time housekeeper and 'companion' to Angus. 'Aunt' Elspat is the 'family' matriarch and quite entertaining!  We can't forget the silly sensational magazine writer, Swan, that is roaming around trying to get a good story.

So grab a copy and a dram of 'The Doom of the Campbells' (a special blend of Scotch whiskey) and settle in for a great read!

"She creaked out of the room, and returned bearing a decanter nearly full of a darkish brown liquid filled with gold where the light struck it. Colin placed it tenderly on the table. For Elspat and Kathryn he poured out an infinitesimal amount. For himself and Alan he poured out about a quarter of a tumblerful."