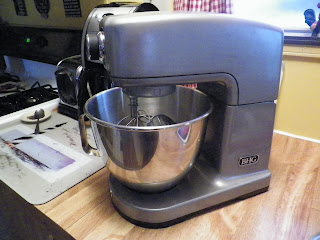 Look what I got for my Birthday! Thanks Mom! I have been wanting one to make bread with. I'm convinced I can make better bread with one of these. I did make Honey Whole Wheat bread with it and it turned out the best I've done so far. The first rise was beautiful but the rise in the pans didn't seem to do to well. The bread was light and delicious just not tall enough to make sandwiches with. Any tips on what I did wrong from any bread makers out there?

Now I am looking for bread recipes. If you have any that you really like link them up in a comment for me! Thanks!

"I judge a restaurant by the bread and by the coffee." --Burt Lancaster

"I am proud to be an American. Because an American can eat anything on the face of this earth as long as he has two pieces of bread." --Bill Cosby

"The sky is the daily bread of the eyes." --Ralph Waldo Emerson

"How can a nation be great if its bread tastes like Kleenex?"
--Julia Child

"Without bread all is misery."  --William Cobbett

"Good bread is the most fundamentally satisfying of all foods; and good bread with fresh butter, the greatest of feasts."  --James Beard

In 1943 sliced Bread was banned in the US. Read here to see why

Peanut butter was first paired with jelly in a sandwich in the 1920s.

One bushel of wheat will produce 73 one-pound loaves of bread.

It takes 9 seconds for a combine to harvest enough wheat to make about 70 loaves of bread.

One bread superstition is that if you put a piece of bread in a baby's cradle, it will keep away disease.


Napoleon gave a common bread its name when he demanded a loaf of dark rye bread for his horse during the Prussian campaign. "Pain pour Nicole," he ordered, which meant "Bread for Nicole," his horse. To Germanic ears, the request sounded like "pumpernickel," which is the term we use today for this traditional loaf

Legend has it that whoever eats the last piece of bread has to kiss the cook!