Today is my brother's birthday celebration. His actual birthday is January 31st. For four days we will both be 53 and then I jump ahead again! Donald is blind. Born 3 months early, he has been blind from birth. He contracted Pseudomonas Aeruginosa in the womb, when left too long after the water broke. It attacks the eye virulently and totally destroys them when not caught early. There was an outbreak of this a few years back when the contacts you can leave in became popular and people were not keeping their eyes lubricated or changing the lens often enough. 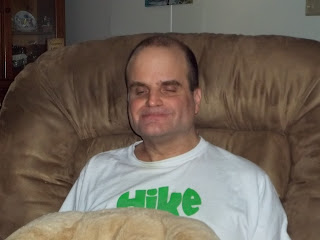 Donald has a great personality, positive attitude and great sense of humor. One time my brother-in-law made the comment 'Blind in one eye and can't see out the other' in front of Donald and Donald said 'I can't see out of either eye'. Tim thought he had offended him but when he looked over at Donald he was laughing. He gets a kick out of that kind of stuff. Another neat story is when the Dr. convinced my mom to put him in a home for the mentally retarded and after a year of separation she went up to see him and they didn't tell him she was coming because she wanted to be able to see him in his daily routine and environment. When she finally went up to him she just put his hands on her face so he could feel her and he said 'that's my momma'. She did take him home with her, he did not belong there. But they were good to him there and loved him tremendously. Everyone loves Donald!
Donald has a fine motor skills impairment so he can't do things like put toothpaste on a brush, tie shoes, shave etc. so he can't be independent. He can't play the guitar, but he can play the drums like crazy and the piano pretty well. He has an excellent ear.
He loves cars and trucks and can tell you what engines every make has in them etc. He can tell what make and model a car is from the sound it makes when you turn the key and start the engine. If there's a knock or a ping in your engine he can tell you exactly what it is. It has always amazed us.  He reads books constantly too! He gets them on disc from the library for the blind and reads everyday. He just discovered Charlaine Harris' Sookie Stackhouse books and loves them! Westerns are his favorite though. Donald loves Neil Diamond, vanilla ice cream, chocolate milk, and going anywhere your going.
And this is linked to Weekend Cooking because.... Donald's favorite birthday cake of course!

This cake is so moist and gets better day after day!

Well I'm off to get the cake in the oven, and see to the spaghetti and meatballs (his favorite food!).

What are you cooking today?
Posted by Peggy Arthurs at 9:01 AM