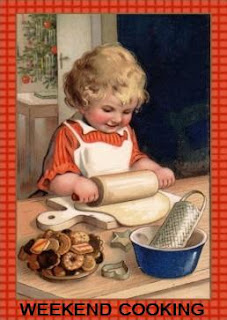 This post is for Nan over at Letters From a Hill Farm She stopped over earlier this week thinking my post titled 'Doughnuts' was a recipe for them, but they were crochet doughnuts. So here you go Nan, two recipes for the real thing! The first one is from my Farmer's Wife Cookbook (I wrote about it in an earlier post). I am including some of the tips printed on the page following the recipe from an edition of the old Farmer's Wife Magazine published 1893-1939 or thereabouts. The second recipe is from my Michigan cookbook - Mrs. Chard's Almanac Cook Book Hollyhocks & Radishes. This recipe is dated 1925.

1. To the sour cream and milk, add the sugar and let dissolve.
2. Add the eggs, then the sifted dry ingredients to make a soft dough. A small amount of additional flour may be needed.
3. Roll out to 1/4 inch (1/2 cm) thickness and cut. Let stand 30 minutes to dry on the outside.
4. Fry in the deep fat heated to 365*F/185*C (will brown a cube of bread in 60 seconds). Fry enough to make 1 layer on top of the fat and turn just once during frying. Remove, drain on unglazed paper. Dust with sugar, if desired.


In mixing doughs for deep-fat frying, we took pains to keep the dough fairly soft, or we knew the result would be bready, dry doughnuts. Just stiff enough to handle is a good general rule. It is helpful to allow the outside of the cut doughnut to dry slightly before frying, as a dry surface is less likely to become grease-soaked. We used a pastry canvas on our bread board, and a white stocking over the rolling pin to help keep from using an excess of flour in rolling out the dough.
We found it wise to drop in just enough doughnuts or fritters at one time so that they would cover the surface of the fat when they would rise. If there was any tendency for them to crack, they were turned several times during frying until the right shade of browness was secured.
Unglazed paper on a flat pan was close by so that each piece was removed and drained, excess fat was absorbed by this paper.
As you are frying, free the fat of small particles of food which will escape, for if they remain they become too brown and cause the fat to deteriorate.
Regulation doughnuts, knots, squares, cruller-twist, or just drops of dough are all possible from the same dough if you wish to have variety. Avoid any piece which is too thick for quick cooking, or the center will be doughy.
by Miriam J. Williams, November 1933

In 1925, the Ladies Aid of the first Union Church in Cedarville put out a little cookbook. This was Mary Gagnon Hudson's recipe for a cake type doughnut, and it's just as good today as it was then.  If you like, make the dough the night before.

With a wooden spoon, cream together butter and sugar, then beat in eggs and vanilla. Sift together dry ingredients. Lightly stir into egg mixture, alternating with milk. Add more flour if necessary for easier handling.

On a lightly floured board or pastry cloth, roll dough out to 1/2 inch thickness. Cut out doughnuts and holes, dipping cutter in flour each time.

Heat oil in a skillet until rippling, then use a scrap of dough to test. When ready, fry a few doughnuts and holes at a time, turning with tongs as they brown. Drain on paper towels then serve immediately.

This post is linked to Beth Fish Reads weekly Weekend Cooking post. Stop over and check out all the food related posts!
Posted by Peggy Arthurs at 1:57 PM