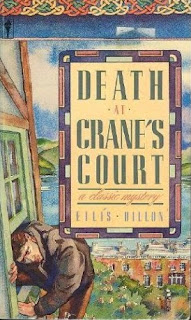 Murder strikes at a hotel on the Galway Bay in this witty Irish Mystery by Eilis (aye-lish) Dillon. Published in 1953 this is the first of three mysteries by this wonderful Irish writer. What a loss to the genre that she didn't write more mysteries among her 50 published books!

Eilis was born in Galway Ireland into a family deeply involved in the events of the Irish War of Independence. Her great uncle Joseph Mary Plunkett was one of the seven signatories of the Proclamation of Independence and was executed by firing squad following the Rebellion of Easter Week 1916. Her father and mother were both in jail at various times for political reasons. For more info on Eilis Dillon see her website here.

Book description from back cover of Rue Morgue edition:
George Arrow is a bachelor of independent means who, when diagnosed with a weak heart, is urged to live out his days at Crane's Court, a comfortable hotel on the Bay of Galway. On the train he chances to meet the hotel's new owner, John Burden, who has just inherited the property and announces his intentions to shake things up a bit. and so he does. He quickly makes enemies of all the guests and staff, except for Eleanor Keane, the ambitious office manager who means to marry him. Meanwhile George makes friends with the amiable Professor Daly, one of the many old people who reside permanently on the premises. When Burden is stabbed through the heart, Daly's old friend Inspector Mike Kenny soon discovers that practically everybody at the hotel has good reason to want him dead, particularly Barbara Henry, the previous owner's widowed niece who now stands to inherit Crane's court. And it turns out that her uncle may have been murdered as well. Told with gentle wit and charm, this first detective novel by a renowned Irish writer of children's and literary fiction was originally published in 1953 and was followed by two others before she gave up crime writing for good.

Ms. Dillon has a way with words. An example from chapter 2:
'The veranda was still full of people when George reached the glass door and looked in. He was not a timid man, but he quailed a little before the barrage of eyes turned towards him. It was like looking into an aquarium full of ancient carp, he thought. for most of the people were old, and they all stared with the intense single-mindedness and lack of embarrassment of the aged.
He opened the door, marched in and looked about him, a little truculently, for a vacant table. There was dead silence. There was no vacant table. The old people were grinning fiendishly now, and one or two had begun to comment audible, though favorably, on his appearance. His knees wavered. Then a voice beside him said, in an undertone: "You had better sit here with me, Mr. Arrow, till the excitement dies down."'

I can just see those 'old carp staring fiendishly, can't you?

Death at Crane's Court is a character driven story and oh what characters they are!

George Arrow - Thinks he is dying of a bad heart and has come here to live out his days in relative quiet and peace. Afraid to do anything strenuous or get stressed out. He falls in love with Mrs. Henry

John Burden - The odious new owner of the Court who wastes no time in making sure everyone wants to bump him off.

Professor Daly - An elderly professor of English literature with a secret...

Mrs. Robinson - Dubbed the 'Queen-bee' she knows how to get what she wants! And watch out for her greasy son Horace!

Colonel Waters - He has never really been a colonel, but he is certainly henpecked.

Mrs. Fennell - Very old and not quite right in the head, she lives in a small cottage on the grounds where she keeps a dozen cats and tends to her luxuriant flower garden. How do the cats equate into the lushness of her gardens?

and of course the Ghost of Sir Rodney the first owner of Crane's Court and seen only by Mrs. Fennell.

Just to name a few! and Professor Daly and Inspector Mike Kenny re-appear in the third book, Death in the Quadrangle!

I did not have an inkling who the murderer was right up until it was revealed. I thoroughly enjoyed my visit to Crane's Court and really hated to come to the end of the book. I did hurry and order copies of the other two mysteries though and am looking forward to reading them soon. Mystery lovers - Read this!

Posted by Peggy Arthurs at 7:18 PM