The Secret of Lies


'Maybe its the raw brilliance of the pale white moon suspended in a hard black sky that somehow makes everything about this night feel harsher. Uglier. Failing to soften what now seems especially unconscionable'

Those are the opening lines to 'The Secret of Lies' and it only gets better from there! Barbara Forte Abate's novel is beautifully written. She has a way with words.

Book summary:
'Propelled by an insurmountable sense of desperation, Stevie Burke is recklessly abandoning home, husband, and outwardly contented life under cover of night; at last resigned to defeat in her long battle against the tortured memories of her past.Days later, lost and floundering in a dreary motel room without plan or destination, it is a long ago song playing on the radio that gently tugs Stevie back through the dust of remembrance.  1957 – The last summer spent at the ancient house overlooking the North Atlantic.  A season which had unfolded with abundant promise, but then spiraled horribly out of control – torn apart by a shattering tragedy that remains splintered in fragments upon her soul.  And it is only now, when Stevie at last lifts her eyes to stare deep into the heart of her long sequestered memories, that the long held secrets of past and future are at last unveiled... 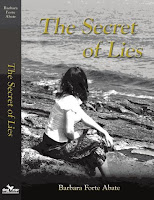 This is a well written, character driven story. Ms. Abate draws you in and your hooked! You'll like Stevie and feel like you are there with her on the beach. I couldn't put the book down. I had to find out what the secrets were and how they effected the future. I was not disappointed! I highly recommend this book. Trust me - go out and get it and read it. Let me know what you think!

I'll be waiting for more from this author!
Posted by Peggy Arthurs at 10:56 PM