I found an Agatha Christie treasure trove among others on the laundry room table at my mom's apartment complex this last week! 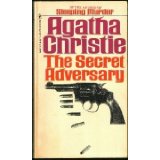 'The Secret Adversary'
Where is Jane Finn? The mere mention of her name produced a very strange reaction all over London. So strange, in fact, that Tommy and Tuppence deceided to find this mysterious missing lady. And once those two determine sleuths made up their minds, nothing could stop them -- not international espionage, kidnapping...or even murder.

'The A.B.C. Murders'
Mr. Hercule Poirot--you fancy yourself, don't you, at solving mysteries that are too difficult for our poor thick-headed British police? Let us see, Mr. Clever Poirot, just how clever you can be." Was the anonymous note a brilliant challenge or a crackpot hoax? The answer is as loud and clear as a woman's scream--precisely that of Alice Ascher, a shopkeeper in Andover bludgeoned to death on the job. Next to her corpse, a clue that's as simple as ABC. Alphabetically speaking, the master Belgian sleuth suspects it's now a matter of one down, twenty-five to go..

'Curtain'
Poirot returns to the scene of his very first crime to solve a mystery that will be his last.

'The Boomerang Clue'
Was it a misstep that sent the handsome stranger plummeting to his death from a cliff? Or something more sinister? Fun-loving adventurers Bobby Jones and Lady Frances Derwent's suspicions are certainly aroused—especially since the man's dying words were so peculiar: Why didn't they ask Evans? Bobby and Frankie would love to know. Unfortunately, asking it of the wrong people have sent the amateur sleuths running for their lives—on a wild and deadly pursuit to discover who Evans is, what it was he wasn't asked, and why the mysterious inquiry has put their own lives in mortal danger..

'The Tuesday Club Murders'
A crime expert plays with the rules of murder mystery, only to write himself out of the story. Mr. Treves, a famous criminologist, loves murder mysteries--except for the fact that they all begin with murder. But his desire to move the fatal moment to the end just might be the death of him.


I am still waiting on a book I ordered back in September. 'Murder at Shots Hall' by Maureen Sarsfield seems to have gotten lost in the mail somewhere and I have to track it down today!  Wish me luck! I've been dying to read this book!

Posted by Peggy Arthurs at 8:06 AM