When lovely Pat Abbott first came to the Wainright estate, she was touched by a faint, ominous chill. She had heard strange rumors about the fabulous mansion, rumors that seemed to fade in he dazzle and excitement of her new job.'Then, as the days passed, Pat came to know the odd assortment who lived in the mansion...slowly the forgotten stories began to take on new, more terrifying meaning...until suddenly her dream job had turned into a bizarre nightmare of violence and murder.
Mary Roberts Rinehart
presents a unique mystery novel that weaves
romance and suspense into a chilling tragedy-of-errors.

The Great Mistake by Mary Roberts Rinehart was a great who dunnit! I never even got close to figuring it out.  This novel was published in 1940 (follow the link to a complete list of her works with publication dates). Set in a rambling, eccentric mansion, The Cloisters, and full of interesting, suspicious characters this novel weaves a large web of mystery and suspense. Three murders, one mysterious attack and subsequent missing person and romance, this novel has it all!

Pat Abbott goes to work for Maud Wainwright as her live-in personal secretary. Not long after she starts work there a mysterious attack on Evan, the night watchman, occurs. His pants and his keys to Cloisters is missing! Things start moving fast from that point with Maud mysteriously coming home from an outing frail and nervous with a weak heart. Now pretty much bedridden. What happened that day as she was riding home in her car? What did she see that so shocked her?  Maud's wayward, money hungry daughter-in-law shows up unexpectedly and moves back in with no intention of leaving anytime soon. A man who had run off years ago with a young girl returns home sick and ends up dead beside Maud's pool. Evan, the watchman goes missing from his hospital room. Tony, Maud's son, is falling for Pat, but there is that no good wife back and refusing to divorce and threatening to expose a big secret. Then there is the secret emergency meetings Maud has with her family attorney. Hmmm, lots of intrigue going on at the Cloisters. Great name for a mansion isn't it!? This story is told by Pat Abbott in recollection fashion as she writes a novel about the happenings at The Cloister. If you love Mary Roberts Rinehart you don't want to miss this one! 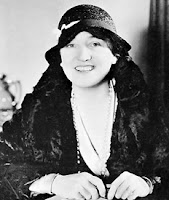 Mary Roberts Rinehart was born in Pittsburgh Pa., just 40 miles south of me, on August 12, 1876. She attended nursing school at 17 and married Dr. Stanley Rinehart at 19. They had 3 boys together. I found some very interesting facts about Mary on my search this morning for the date The Great Mistake was published and thought I would share these links with you!
Mary spent many, many summers in her cottage in Bar Harbor Maine (one of my favorite places in all the world is Maine! I have been to Bar Harbor several times) She loved to sit on top of Cadillac Mountain in the Acadia National Park with her son (if you've never been to Cadillac Mt. you have to make it a point to go!). While at her cottage one summer a very interesting experience happened to Mary that could have been right out of her novels! Check it out!
Also found out that Mary is buried at Arlington National Cemetery with her husband who was in the medical corp. Will definitely have to check out her stone next trip there!