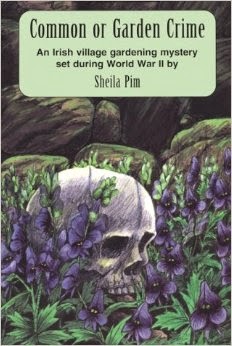 Lucy Bex preferred Jane Austen or Anthony Trollope to the detective stories her brother Linnaeus gulped down but when a neighbor is murdered with monkshood harvested from Lucy's own garden, she's the one who turns detective and spots the crucial clue that prevents the wrong person from going to the gallows. Set in 1943 in the small town of Clonmeen on the outskirts of Dublin, this delightful tale was written by an author who was called 'the Irish Angela Thirkell'.
The war in Europe seems very distant in neutral Ireland, though it draws a little nearer when Lucy's nephew, an officer in the British army, comes home on leave. However, most of the residents are far more interested in how their gardens grow than what's happening on the Eastern Front or in Africa. It's a death a little closer to home that finally grabs their interest. The Irish Guard is called in to investigate but this time it may take someone with a green thumb to catch the murderer.                           ~back of book

A delightful war time mystery. A small village in Ireland dealing with the shortages of food and fuel. They busy themselves with their gardens and occasional tea parties or tennis matches. Everyone is busy preparing for the annual flower show, the highlight of the year in Clonmeen, when Lady Madeleine Osmund dies of poisoning by Monkshood. Everyone has it in their gardens. But one garden has the most lethal variety, and they had all been there for tea the day before. Was it an accident, suicide or murder?

A lovely list of suspects from Lady Madeleine's nephew Lord Barna, Otway her husband to Miss FitzEustace the new artist in town who was with her when she took ill. Lucy Bex is the main character and I loved her and her little family, brother Linnaeus and his son Ivor. Lucy is a no nonsense, competent woman whom everyone loves and looks up too. She is determined that Scotland Yard Inspector Lancey be left to do his job and has every confidence he will get it done.

Turning back to the bedroom, she said to Ivor, 'Now that I've told you the whole story, I don't want to talk about it any more. It isn't pleasant to harbor such thoughts about neighbors and people who've been in your own home. It's too serious a matter for guessing. We must just wait till the police come to the end of their inquiries. From what I gathered this morning, they are doing a good deal of unobtrusive investigating over there at the house. So I should think we could leave it to them, and I hope they'll be quick about it. I'm going now. it's time for you to get up.'

She can't help it if everywhere she goes evidence is thrust at her, can she?

If you like gardening and plants this mystery will be a special delight for you.   Miss Pim was an avid gardener herself and plants and gardens figure into all her mysteries. She wrote 4 and I've read 3 of them now. They are each standalone stories so they don't need to be read in any particular order. Of course these books are out of print and you will have to find a used copy, but I highly recommend them! A Brush With Death is still available new @ Rue Morgue

By the way in the description on the back of the book it says the deadly monkshood comes from Lucy's garden, but that is an error, it doesn't.