The Hollow by Agatha Christie 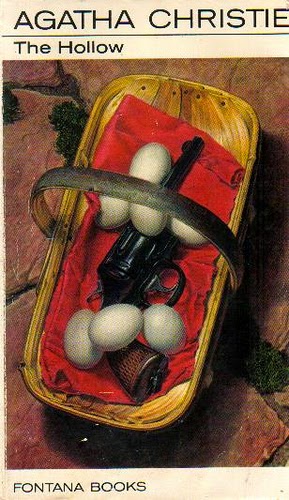 Back cover:
Hercule Poirot was both annoyed and bored. Death was not amusing, and here, by way of a joke, they had arranged for him a set piece in extremely bad taste. By the side of the crowded pool a body had been artistically arranged with an out-flung arm; even some ghoulishly red paint dripped. The 'body' was spectacularly handsome, and several people stood round in unlikely poses. It was all really very amateurish.

But as he looked Poirot suddenly realised that this scene had a point of reality, a reality that hit him between the eyes like a hammer blow. For it was not red paint that dripped. It was blood.

He was looking at a dying man...

Dr. John Christow is an excellent doctor and everyone loves him. Outwardly he seems quite selfless and caring and kind, but in reality he is basically a very selfish, self-centered man. His wife Gerda worships him, waits on him hand and foot, frets over pleasing him. Yet when Poirot arrives for a luncheon date at the country home of the Angkatell's he finds Gerda standing over the body of her dying husband holding a gun. Henrietta, a family friend (maybe John's lover?) takes the gun from Gerda and 'accidentally' drops it in the pool when Poirot startles her by speaking and stepping toward her. Was she protecting Gerda or someone else? Who's fingerprints would have been on the gun besides Gerda's? Everyone in this story has a motive for wanting John dead and an opportunity to have done it, including Actress Veronica Cray his old love. She showed up after 15 years just the night before. But the whole thing looks staged to Poirot. Who was it staged for and why?


I enjoyed this Christie very much! I was convinced of the guilt of just about every character in it at some point or another and was fairly sure it was not who it was.

After reading a review for this on Pretty Sinister Books, I just had to have it. Read John's review too if you haven't already! He also has several of the covers this book was printed with through the years.

I read this book for Crime Fiction of the Year over at Past Offences. This month's year was 1946. A very good year I would say looking at all the other books reviewed for this!