The Removers : A Memoir by Andrew Meredith 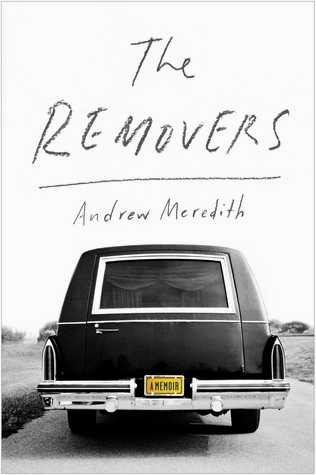 Description:
A dark, poignant, and emotionally brave coming-of-age memoir: the story of a young man who, by handling the dead, makes peace with the living.

For almost twenty years I mistook my father’s downfall as my own. But it wasn’t. It was not my sister’s either, nor my mother’s.

A literature professor at La Salle University, Andrew Meredith’s father was fired after unspecified allegations of sexual misconduct. It’s a transgression Andrew cannot forgive, for it brought about long-lasting familial despair. In the wake of the scandal, Andrew’s parents limp along, trapped in an unhappy marriage. Meanwhile, Andrew treads water, stuck in a kind of suspended adolescence—falling in and out of school, moving blindly from one half-hearted relationship to the next, slowly killing the nights drinking beer and listening to music with his childhood friends.

Broke, Andrew moves back home to his childhood neighborhood in Northeast Philadelphia and takes a job alongside his father as a “remover,” the name for those unseen, unsung workers who take away the bodies of those who die at home. He describes, as only a professional can do, the intimate, horrific, poignant, and occasionally morbidly comedic aspects of handling the dead. Just how do you carry a 500-pound corpse down winding stairs? What actually happens to pacemakers, tooth fillings, surgical screws, artificial hips, and anything else that the deceased has within his or her body? Andrew begins to see his father not through the lens of a wronged and resentful child, but as a sympathetic, imperfect man who loves his family despite his flaws. Eventually the chip on his shoulder starts to lose its weight.

Poetic without being florid, and with the literary ability to transform the naturally grotesque into the exquisite, The Removers is a searing story of a young man who finds in death a redemptive path toward the forgiveness of the living, including himself.

This was a good book. I just about read it right through in one sitting. The story skipped back and forth a little to when he was young and before the firing and after the firing, but it didn't distract. I had a hard time putting the book down to go to bed. I was compelled to finish and see how things turned out for Andrew and his family.

Pretty graphic descriptions of dead bodies, especially the one that had lain for a week before anyone checked on him, and what happens to a body during cremation. But it was really interesting learning about this aspect of what happens when someone dies.

I'm glad Andrew invited us on his journey through a fractured family. How he finally came to be comfortable with himself, to see he had value and something to contribute to life.  We all have traumas and drama in our families. But what he learned and shared with you and I is that the important thing is our response to them. Worth a look! I recommend it.